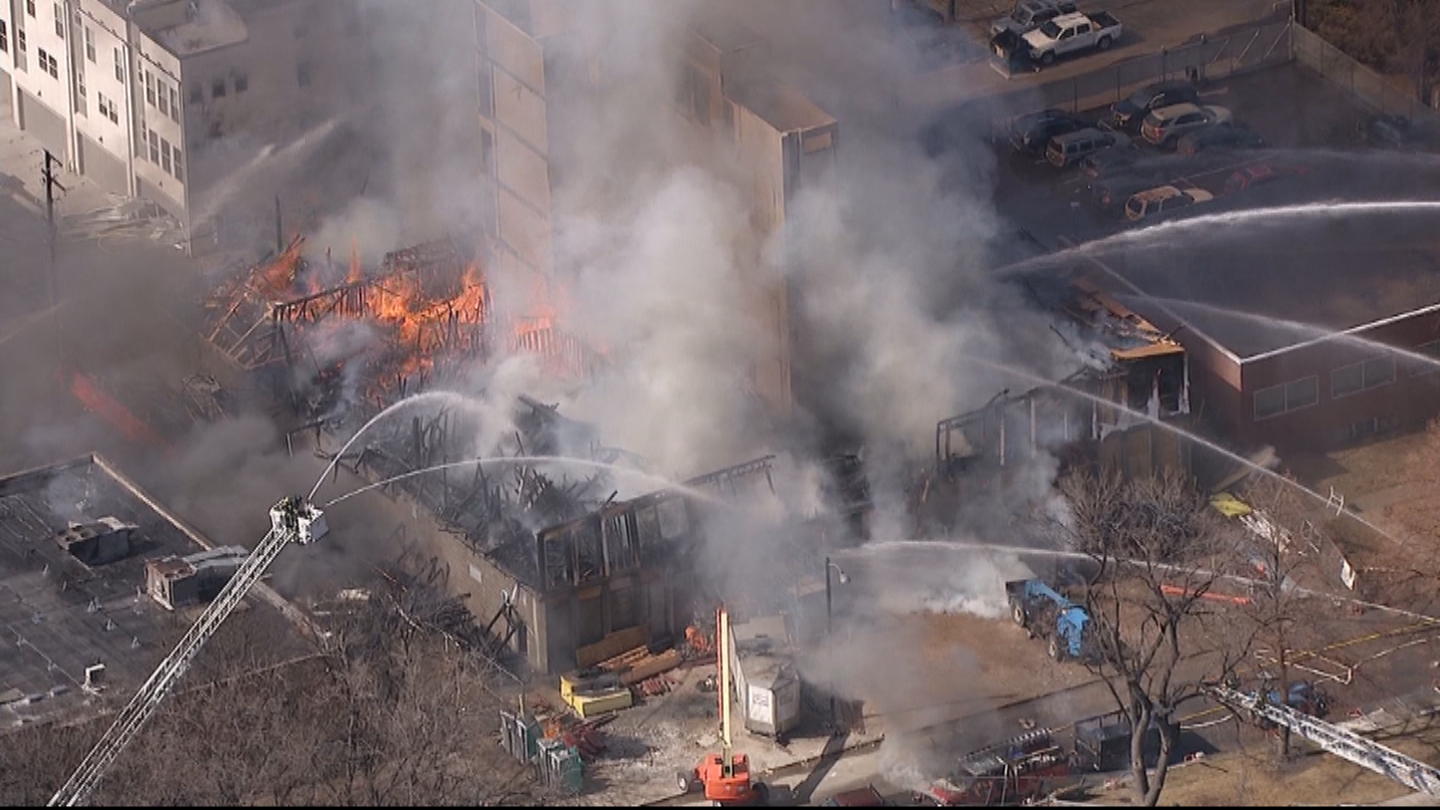 DENVER -- Flames were shooting from a burning building under construction in downtown Denver on Wednesday afternoon, CBS Denver reports. Two people remained unaccounted for after the fire was extinguished and six people were injured, including one firefighter.

The fire was reported at 12:09 p.m. by construction workers on the third floor, CBS Denver writes. The fire produced such extreme heat that it was detected from space, the Denver Post reports.

Firefighters rushed to put out the fire which had consumed the entire building under construction and was putting out a lot of thick, heavy black smoke.

About 100 firefighters were on scene along with several fire engines, many of them ladder trucks, spraying water on the burning building. Some 50 construction workers were working at the site when the fire began.

Fire crews were seen spraying nearby buildings with their hoses. The building where the fire started was a total loss.

A neighboring building was also damaged by fire. Four nearby buildings were saved from significant damage by firefighters.

A total of 40 vehicles parked in a nearby lot were damaged, some had windows shattered and the tires either exploded or were melted. Construction equipment at the scene was also damaged.

An estimate of just how much damage was caused will be tallied once the investigation is complete.

"You could feel the heat as far away as the Midtown Medical Building," said Denver Fire Capt. Greg Pixley.

Flames were seen shooting from the building located at 1833 Emerson for several minutes. It took fire crews more than a half an hour to put out the flames on the building that was under construction.

The building was slated to be a five-story apartment building with 84 units that was going to be called "Emerson Place."

The thick, black smoke could be seen for miles in and around downtown Denver, even after crews began dousing the flames with water.

Pixley said there were six people injured, including one person who was critically injured and a firefighter who was injured. Both were transported to Denver Health where they were treated. Four others were treated for smoke inhalation and for injuries suffered from jumping from the second or third floors to escape the fire.

The injured also include those who attempted to catch people who jumped from the burning building.

He said two people at the construction site remained unaccounted for at 1:30 p.m. and urged anyone who saw the fire to call the Denver Fire Department to report what they may have seen.

"We're working diligently to make sure these people are found," said Pixley.

"We're going to be working for a long time to reduce the risk of sparks," said Pixley. "This is going to be a very extensive, in-depth investigation. We won't have the answers today or tomorrow, but we will have them."

The public was urged to stay away from the area to give firefighters room to completely extinguish the fire and continue with their investigation. Denver firefighters were expected to say on scene until well into the night Wednesday.