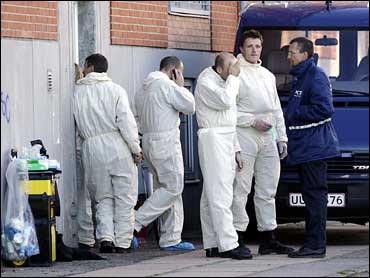 The men, between ages 19 and 29, were suspected of preparing a terror act involving explosives, said Jakob Scharf, the head of the PET intelligence service.

"With the arrests we have prevented a terror attack," Scharf told reporters at a news conference.

He did not say what the target of the planned attack was.

An advisor to Denmark's intelligence services told CBS News Tuesday the suspects had been "under observation for a long time."

The advisor, who spoke to CBS News on condition of anonymity, said he believes the eight men were planning an attack on an "iconic target." He said a previously-disrupted plot had targeted Copenhagen's main railway station.

Those arrested were six Danish citizens and two foreign nationals with Danish residence permits, Scharf said. The suspects had been under surveillance for a longer period and were arrested after police gathered enough evidence against them, he said.

"They also have been producing an unstable explosive in a densely populated area," Scharf said.

He said Danish investigators had worked with "several foreign cooperation partners" in the probe.

"Those arrested are militant Islamists with connections to leading al Qaeda persons," Scharf said, but did not name those people. "According to our assessment, there is a direct connection to al Qaeda."

The suspects - of Afghan, Pakistani, Somali and Turkish origin - were arrested without incident in separate raids at 2 a.m. local time, Scharf told reporters, declining to say whether more people were sought in the investigation. Eleven locations were raided in and around Copenhagen, including the Ishoej suburb and the Noerrebro district of the capital.

Television news video shot from a helicopter showed bomb squads and forensics agents at those locations.

Sadiq al-Fatlawi, who said he lives on the floor above the cab driver told TV2 News that police ordered him and other neighbors to leave the building during the raid because it was dangerous to remain inside.

"When we came down to the (police) van they told us that they had suspicions that there were explosives in the property," al-Fatlawi said. They were let back in four hours later.

He said the taxi driver was of Pakistani origin and had recently moved into the building.

The Danish Emergency Management Agency said its chemical unit had "assisted" the police, but did not give details.

It was the third time Danish police cracked down on suspected terrorist networks since 2005.

The trial of four men suspected of planning to blow up a target in Denmark or Europe was set to begin in Copenhagen on Wednesday.

In February, a court sentenced Abdul Basit Abu Lifa, a Danish citizen of Palestinian descent, to seven years in prison for his involvement in a Bosnia-linked plot to blow up a target in Europe. Three other defendants were acquitted in that case, although one of them is awaiting a retrial.

Terrorists have not hit Denmark in more than two decades, but the July 2005 bombings in London stirred fears that the Scandinavian country could be targeted for its participation in the U.S.-led coalition in Iraq.

Those fears grew after a Danish newspaper published 12 cartoons of the Prophet Muhammad, triggering fiery protests in Muslim countries in early 2006. Many Muslims considered the drawings blasphemous.

In June, Denmark pulled out its 460-member army contingent from Iraq and replaced it with a small air force squad.

Scharf said the planned attack did not appear linked to the prophet cartoons or Denmark's involvement in Iraq.

Justice Minister Lene Espersen said the arrests did not change the terror threat against Denmark, although she acknowledged that "an act of terror has been prevented with the nighttime arrests."