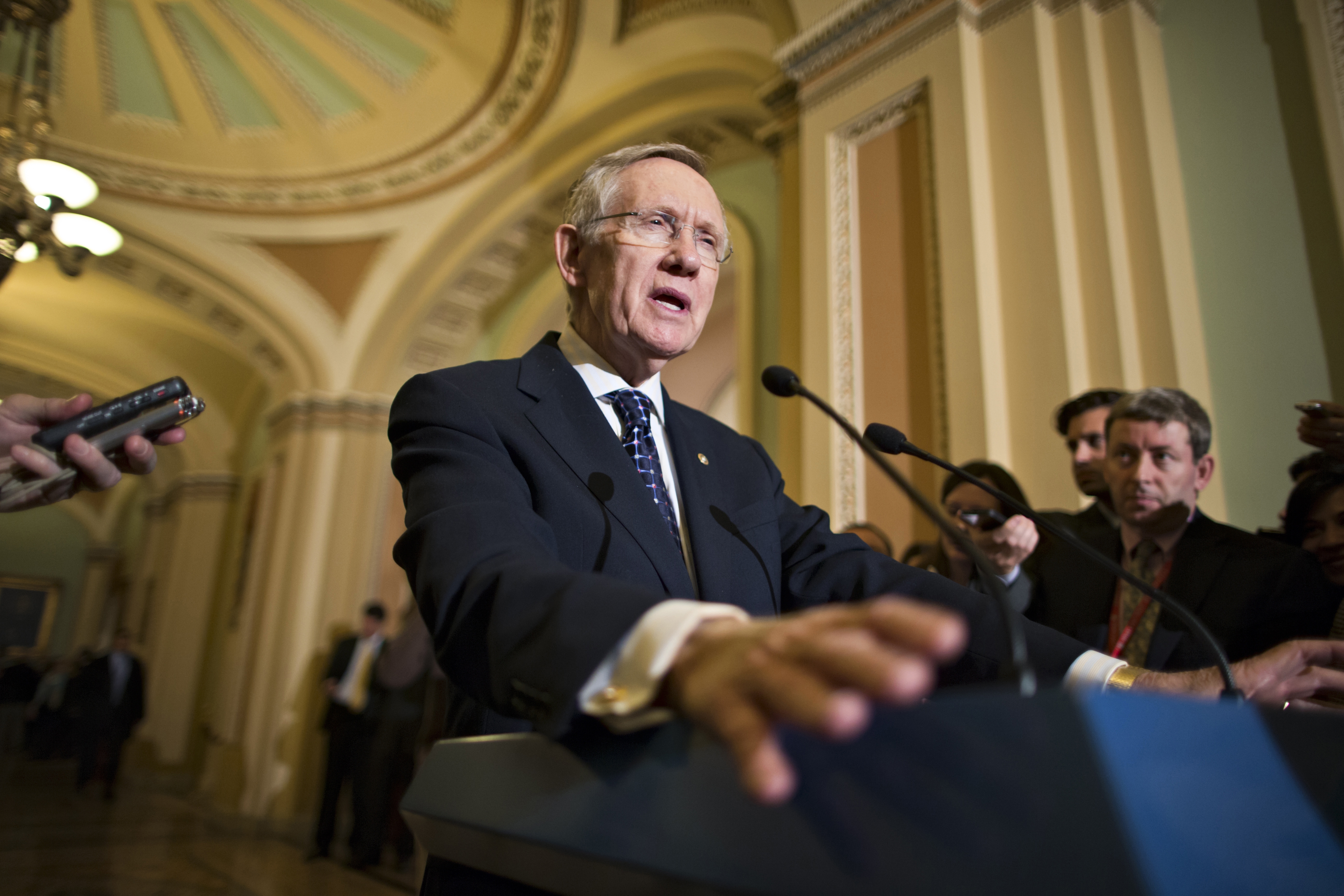 Hours before President Obama delivers what is expected to be an emotional speech about gun violence in Connecticut, Democrats in Washington are targeting a small but vocal group of Republican senators who are pledging to block a vote on legislation mandating universal background checks for gun buyers-- or any other bill that would impose new gun restrictions.

"Many Senate Republicans seem afraid to even engage in this debate," Senate Majority Leader Harry Reid, D-Nev., said Monday on the Senate floor. "Shame on them."

In the four months since 20 children and six faculty members were slain in a mass shooting at Sandy Hook Elementary School in Newtown, Conn., the Obama administration has rolled out a wide-ranging package of proposals aimed at reducing gun violence in America. But with the passage of time, Democrats have consistently faced broad opposition among GOP lawmakers to any measures seeking to impose new regulations on how citizens can buy and use guns, and one of the administration's critical proposals -- bill mandating universal background checks for gun buyers -- appears to be in jeopardy.

This morning, 13 Republican senators sent a letter to Reid threatening to filibuster any "legislation that would infringe on the American people's constitutional right to bear arms, or on their ability to exercise this right without being subjected to government surveillance," wrote the senators, who were led by Sens. Rand Paul, R-Ky., Ted Cruz, R-Texas, and Mike Lee, R-Utah. Paul, Cruz and Lee had already sent Reid a letter to that point, but today's missive also included the signatures of 13 fellow Republican senators.

"You know, it's been stated in recent weeks that somehow the memory of Newtown has faded, at least in Washington, and I think it's important to remember for those families and for everyone in that community and for so many people across America, those memories will never fade," White House spokesman Jay Carney told reporters Monday. "It is the obligation of the members of Congress -- who stood and applauded when the President called on them to vote on these issues -- to live up to that applause when the cameras were on. And not to take the less courageous route, by using procedural measures to block a vote."

Carney wondered what those 13 Republican lawmakers would say "to the families of the victims of Newtown about why a certain measure never came to a vote - because they filibustered it."

"If they oppose this legislation, have the courage to say so on the floor and vote no," Carney said. "Don't block it. Don't -- don't hide behind a procedural action to prevent a vote. That's the wrong thing to do."

It's unclear exactly how many votes Democrats have for the legislation governing background checks for gun owners, but 60 votes would be required to overcome a filibuster. In an appearance on CBS' "Face the Nation" Sunday, Sen. John McCain, R-Ariz., said he couldn't "understand" why members of his party would want to avoid debate over the subject.

"I don't understand it. The purpose of the United States Senate is to debate and to vote and to let the people know where we stand," he said. "What are we afraid of?"

Despite the fraught state of negotiations enshrouding the debate over the background check bill, some Democrats are looking to an unlikely potential ally as the key to the measure's success. An aide for Sen. Pat Toomey, R-Pa., acknowledged that the conservative senator is "talking to a number of colleagues," including conservative Democratic Sen. Joe Manchin of West Virginia, about "finding a workable approach" for a background check bill.

Toomey, who is up for re-election in 2016 and who has already been targeted by negative ads by pro-gun control groups, could benefit from the concession to the left down the road, particularly among suburban and urban voters in Democratic-leaning Pennsylvania. And his decision could serve as a lynchpin for additional Republican support.

Reid has signaled he is prepared to postpone consideration of gun control legislation by a week in the hopes that a bipartisan compromise can be reached, putting the gun legislation on the floor the week of April 15th.

In the meantime, though, he has to make sure he can convince at least 60 senators to let that vote proceed.

"The least Republicans owe the parents of these 20 little babies who were murdered at Sandy Hook is a thoughtful debate about who whether stronger laws could have saved their little girls and boys," he said. "It's time Congress engaged in a meaningful conversation and thoughtful debate on how to change the law and culture that have allowed this violence to grow so much. I've said every idea should be debated and every issue should get a vote."