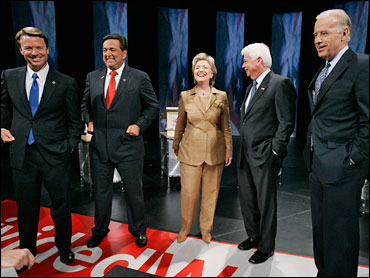 Former Sen. John Edwards sounded his theme that lobbying by big drug and insurance companies has blocked efforts to expand health coverage, a dig at rival Sen. Hillary Rodham Clinton whom he has accused of taking campaign money from those industries.

"They stand between America and the universal health care we need," Edwards said. "We desperately need a president who is not working on compromising with these people."

Clinton did not respond directly but touted her experience of working throughout her career to expand health care.

"I've been working to achieve quality affordable health care for all those years," said Clinton, who earlier this week unveiled her plan for universal health care. "This is a system that, unfortunately, makes a lot of money for a lot of people."

In one of the liveliest exchanges of the debate, Delaware Sen. Joe Biden derided Clinton's claim of experience.

"I love Hillary Clinton. I'm getting beat up for saying some nice things about her," he said. But "let's be frank about this. What's changed to make you think Hillary is going to be able to put together the 15 percent of Republicans" who will be needed to enact any overhaul of the health care system?

"I don't think we need to create a lot of new bureaucracies," he said.

Connecticut Sen. Chris Dodd also touted his experience in Congress, which includes sponsorship of the Family and Medical Leave Act.

"I've had 25 years of getting Republicans and Democrats to work together," he said. Dodd argued that bipartisan efforts are need to get anything accomplished when Congress is so narrowly divided.

Biden said he's demonstrated the ability to stand up to insurance companies.

"It really is going to take someone who is going to be able to take on the insurance industries," he said.

Clinton unwrapped her health care plan earlier in the week and Edwards welcomed her to the debate.

Clinton reminded her rivals that she pushed expanded health care 15 years ago when she was first lady. The effort failed.

"My experience in having gone through it makes me much better prepared," she said.

Richardson touted his hands-on experience as a governor, saying he was "the only one up here who has actually had to deal with health care."

Biden quickly derided that, saying that boosting health care in a state is a lot like playing Little League baseball and thinking you're in the majors.

"I think we need somebody who can manage health care," Richardson replied. "You seem to be denigrating my experience."

The 90-minute debate was sponsored by AARP and Iowa Public Television and broadcast live in the state where precinct caucuses traditionally launch the presidential nominating season. Another 265 public television stations nationwide also broadcast the debate, including some on a delayed basis.

Of the major candidates, only Illinois Sen. Barack Obama declined to attend. He planned to make up for his absence with a rally with seniors Friday in Iowa.

Debate organizers did not invite Dennis Kucinich and Mike Gravel. Neither candidate has an active campaign in Iowa.

There were clear reasons for the focus on seniors.

AARP, the nation's largest group representing seniors, has 390,000 members in Iowa and seniors vote in greater percentages than any demographic group.

In Democratic caucuses in 2000 and 2004 more than 60 percent of the activists who showed up were older than 50, the minimum age for membership in AARP.