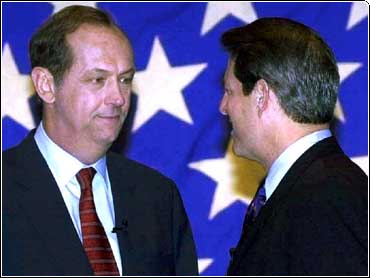 In the first election year debate Wednesday night, Democratic presidential hopeful Bill Bradley accused Al Gore of deliberately distorting his plan to expand health care coverage, but the vice president shot back that his rival's plan is "entirely inadequate" for the poor and others.

Prodded by moderator Peter Jennings to say whether Gore had ever taken a quote or vote out of context, Bradley instantly replied, "Yes."

The vice president, Bradley said, "offended me" by claiming his plan would hurt African-Americans and Latinos.

But Gore, standing a few feet away on the University of New Hampshire stage, paraphrased Harry Truman's famous utterance: "I'm not giving him hell. I'm just telling the truth and they thinks it's hell."

Gore held aloft a card that he said characterized Bradley's health plan and contended the people of New Hampshire "would be left out, left high and dry" by Bradley's plan.

"Let me tell you how the private sector works," Bradley shot back, adding that companies would quickly try to fashion coverage to meet the new demand.

The exchange came about one-third of the way through the 60-minute debate, the first in a series of confrontations in which Democrats and Republicans will take turns debating in the run-up to the first balloting of the presidential campaign.

The Boston Globe's Tom Oliphant told CBS Early Show Co-Anchor Jane Clayson there was no clear-cut winner in the debate.

"This was the kind of debate that illuminates the contrast as opposed to resolving it," Oliphant said. "It's a very stark contrast in style. I'm not so sure there's such a stark contrast substantively."

Oliphant said Bradley is a "philosopher king" while Gore is more focused on "what we can do practically."

"It's a difference between an idealist and a realist," Oliphant said. "It's the kind of contrast where you almost want to throw up your hands and say, go figure. They don't resolve their dispute."

Bradley launched a sharp attack on the Clinton-Gore administration's handling of relations with Russia, saying the United States had not pushed hard enough in the last eight years to reduce the stockpile of nuclear weapons and had agreed to send international aid to Russia "knowing that corruption was rampant."

Gore issued a defense, saying, "I think that in spite of the problems there have been some successes, including a new leader committed to reform, a free press and free elections."

The two men were given the chance to pose questions to one another, and Gore used his turn to ask Bradley whether he believed he had made a mistake on any of three votes: Ronald Reagan's budget cuts in 1981, authorization for the ground war against Iraq in 1990 and the welfare reform law that President Clinton signed into law. Bradley defended them all.

Gore said, "I think all three were mistakes." The vie president voted against the budget cuts, in favor of using force in Kuwait and supported the welfare law.

Gore said he was worried that Bradley had refused to own up to any mistakes, and was worried about that in a president.

Bradley broke in to cite what he said was an error: his vote in 1987 against confirmation of Federal Reserve Chairman Alan Greenspan. "Now that was a mistake," he said to laughter from the audience.

While Bradley said Gore was guilty of campaign distortions, Gore said he wouldn't level that charge against his rival.

Gore is the national frontrunner by far, but Bradley has mounted a surprisingly strong challenge for the Democratic nomination, and is even or ahead in the polling in advance of the first primary set for Feb. 1 in New Hampshire. That prompted the vice president to allude to his "underdog" status.

Said Gore: "I hope my upset victory brings tears to your eyes on Feb. 1."

Gore won a valuable endorsement Wednesday from Massachusetts Senator Ted Kennedy - a move Bradley dismissed as another attempt by the Washington establishment to keep the status quo.