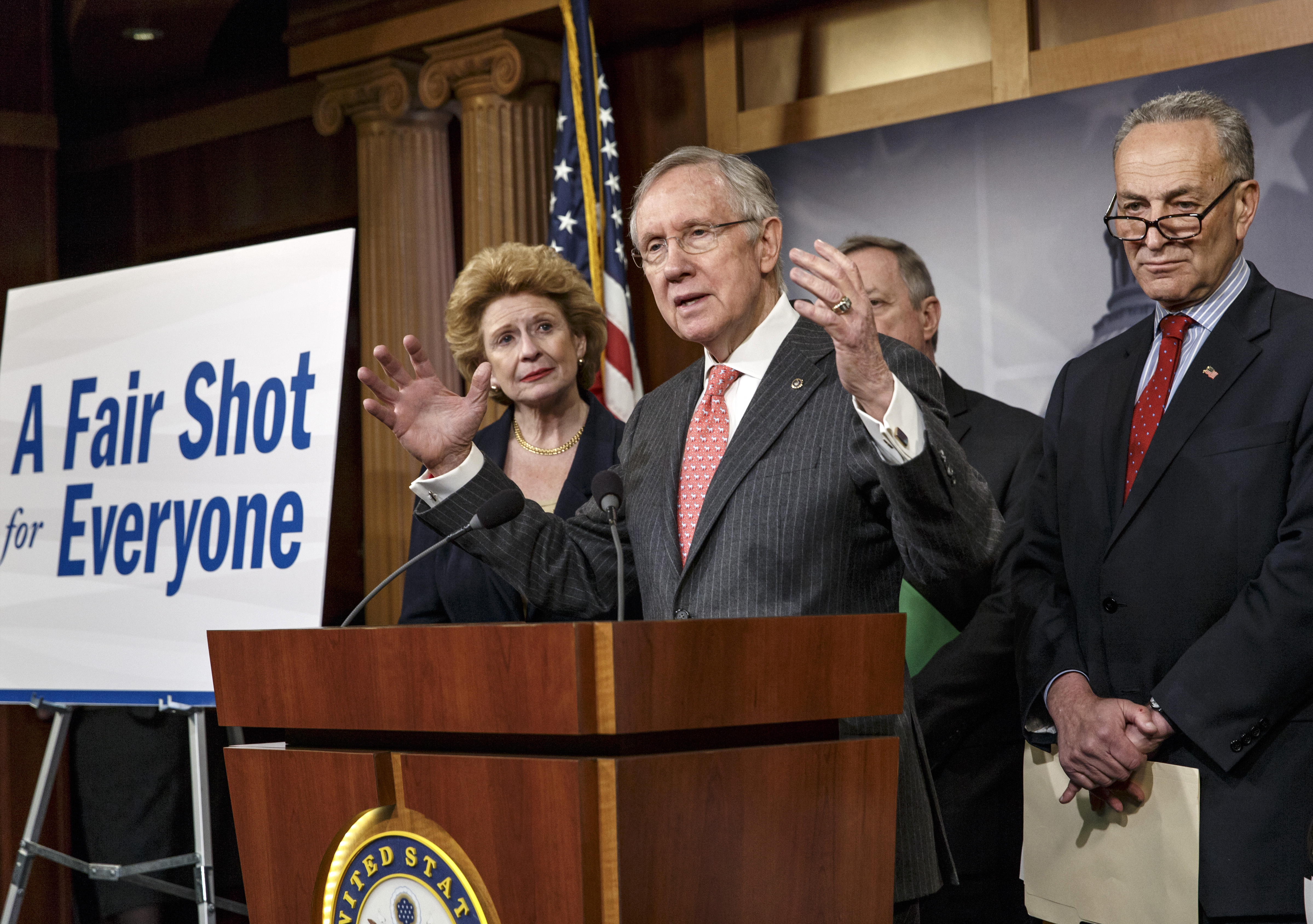 Hoping to replicate the success their party had in the 2012 elections, Senate Democrats on Wednesday unveiled a legislative agenda designed both to boost the middle class and to boost Democratic turnout in the midterms.

"Our priorities reflect the priorities of the middle class," Senate Majority Leader Harry Reid, D-Nev., told reporters at a press conference. He laid out an agenda, drawn up with the help of the Democratic Senatorial Campaign Committee (DSCC), that includes raising the minimum wage, ensuring women receive equal pay for equal work, closing tax loopholes and making college more affordable.

The focus on personal finance issues is the next iteration of the Democrats' 2012 campaign pitch, in which President Obama and his party promised to level the economic playing field. It's a pitch that Democrats say should be just as effective this year, even as Republicans continue to hammer Democrats over the Affordable Care Act.

"We picked up seats in the Senate, we carried the presidency by a large amount" in 2012, Sen. Chuck Schumer, D-N.Y., said. "The American people, the majority aren't affected by Obamacare. They want to hear what we're going to do for them -- just go back and look at the 2012 election."

The circumstances, however, have changed this year. Now that the major elements of the Affordable Care Act are all in place, Republicans have an actual program to criticize. The new Obamacare marketplaces have faced multiple setbacks since open enrollment began in October, including the disastrous rollout of HealthCare.gov.

A CBS News poll released this week shows the nation remains split over the health care law, with a small majority opposed to it. That has been the case for some time, but the poll had more bad news for Democrats -- as many as 70 percent of Republican voters said they are already enthusiastic about voting in November (including 27 percent who are very enthusiastic). By comparison, 58 percent of Democrats said they are enthusiastic about voting. Additionally, 81 percent of Republicans say they're definitely going to vote in November, versus 68 percent of Democrats.

The CBS News poll also shows that more Republicans than Democrats consider this election a chance to vote for or against Mr. Obama. The Senate Democrats, however, plan to time their votes on issues like the minimum wage to coincide with Mr. Obama's campaign-style trips across the country.

Republicans have dismissed the votes as little more than a dog and pony show.

"They plan yet another year, one more year of turning the Senate floor into a campaign studio," Senate Minority Leader Mitch McConnell, R-Ky., said on the Senate floor Wednesday, reducing his Democratic colleagues to "political show boats."

Democrats certainly aren't shying away from the fact that the votes on these issues are largely designed to turn up the heat on Republicans. Democrats, Schumer said, are "going to make crystal clear whose side each party is on."

"Republicans are doing the bidding of the Koch brothers, the wealthy and huge corporations," he said, while Democrats are "focusing like a laser on the concerns of the middle class."

Schumer added, "That's the distinction we will draw in November."

Still, Reid added that Senate Democrats aren't only trying to draw a contrast with the GOP. He pointed to bipartisan cooperation in the Senate this year on a response to the Russian intervention in Ukraine, as well as the bipartisan work on a bill to restore longterm unemployment benefits.