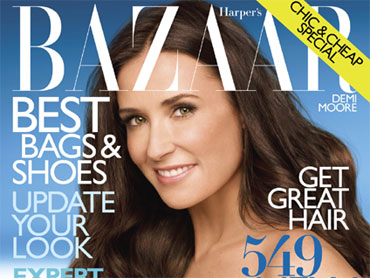 Demi Moore may be an older woman married to a younger man, but she says that she's no "cougar."

The actress proudly says that she prefers to classify herself as a "puma."

"Cougar has become so distasteful. I really hate that expression," Moore told Harper's Bazaar in am interview for its April issue. "It (the term, "puma") has a sweeter quality, more elegant. And then somebody said to me, 'Pumas are only for people in their 30s.'"

A true chameleon at her craft, she's shown her vulnerability in "Ghost," her seriousness in "A Few Good Men," her sexiness in "Indecent Proposal" and her strength in "G.I. Jane." She's even starred as one of "Charlie's Angels," appearing in a bikini on the beach.

But she says it's the role of a mother of three and a wife to actor Ashton Kutcher that has been most rewarding.

Moore recalls the first time she met Kutcher. Sparks flew right away between the two actors.

"I knew it had the potential to be something special right away. It was like meeting somebody that I've just known where you just recognize one another. It was so disproportionate, the level of emotion we were experiencing to the time we had spent together.

"But when you don't know someone, you can't just jump and say, 'I love you.' 'Nice to meet you, I love you!' Yeah. No. We used to end our calls or emails with 'And everything we don't say.' It just seemed too much, too soon."

Being Mrs. Kutcher for the past five years (the couple has been together for seven years total) Moore has taken on many new endeavors, including her mission to stop sex trafficking and slavery.

The couple recently established the DNA Foundation, which has been working with the State Department.

"It is something that we are committed to, particularly as it relates to underage girls," Moore said. "We want to have some effects on legislation in the U.S."