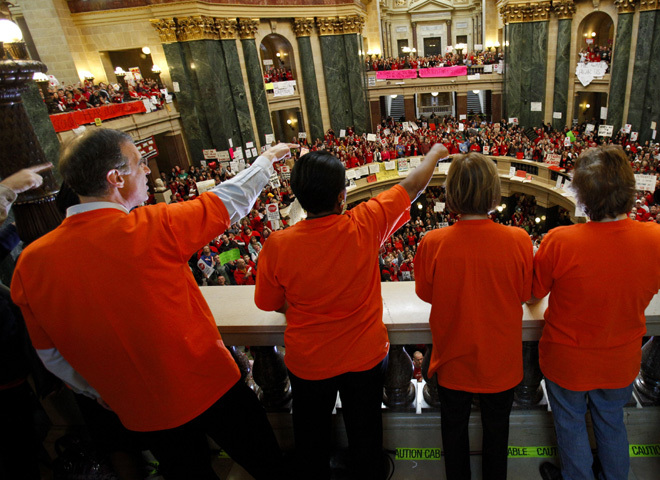 Despite brutal weather, today could be the biggest yet for protesters in Madison, as most union workers across the state have a furlough day today for the holiday, and they are reportedly going to be bused in from all around Wisconsin.

He says taxpayers can no longer afford protracted contract battles with the state's powerful state worker unions, and wants to take away their collective bargaining rights.

Mary Bell, head of the teachers union, has called on teachers who do not have President's Day off to return to schools today. But many of her members have vowed to stay and fight on.

"I want to say thank you to Governor Walker for mobilizing us. This movement has been a long time coming," said one activist.

There's no denying the energy: tens of thousands have marched in Madison. But the governor remains on-message, and has dug in his heels and vowed not to compromise.

"For us it's about balancing our budget; all these other political stories are really kind of a sideshow," Walker said.

Including, he said, the disappearance of 14 minority Democratic Senators who left the state to stall a vote that would make Walker's proposal law.

Speaking to "The Early Show" Monday from an undisclosed location outside Wisconsin, Mark Miller, one of 14 Democrats who left the state, said that Democrats and the public employee unions have put forth a compromise. "The problem is, is that the governor has to agree, and the governor has not done anything except insist that it has to be his way - all or nothing.

"He should have negotiated with the workers and he refused to do that. He tried to impose his will. And he unilaterally is stripping away workers' rights."

"The governor needs to recognize that this is a democracy, and in a democracy you negotiate," Miller told anchor Erica Hill. "The unions, the public employees, have agreed to the economic demands. All they ask is that they be able to retain the workers' rights. And we're supporting them in that."

When asked if moderate Republicans might be able to help reach an agreement, Miller said, "Absolutely. I think cooler heads need to prevail. Workers need to retain their rights. They've given up the economic demands that the governor feels he needs to balance the budget, but now let's find a compromise . . . but that doesn't include stripping workers' rights. That really has nothing to do with balancing the budget."

Walker also lost backing from the head of the Wisconsin Law Enforcement Association. Tracy Fuller, executive board president of the WLEA, said in a statement that he regrets endorsing Walker in last year's governor's race, and describes the governor's proposal (which is referred to as a "Budget Repair Bill") as draconian.

"This bill has some provisions that make no sense, unless the basic intent is to bust unions. One provision makes it illegal for public employers to collect dues for labor organizations. The employer can take deductions for the United Way, or other organizations, but they are prohibited from collecting union dues.

"How does that repair the budget?"

On Saturday for the first time, conservative and Tea Party groups showed up to support Walker. Their rally, though smaller in numbers than the bill's critics, was organized by the business-allied Americans for Prosperity, which has also served as a front group for business interests' campaign against health care reform.

The AFP also introduced a website, standwithwalker.com, asking for signatures on a petition against collective bargaining and the "extravagant pension and health benefits" that labor receives.

"This is not a power grab," Tim Phillips, president of Americans for Prosperity, said at Saturday's pro-Walker rally. "This is about making it fair between private sector workers who are struggling, and public sector unions that frankly have had a cushy deal."

But pro-union demonstrators worry that if Wisconsin cuts public union power, other states will follow suit.

"This is not just about us. This is about America" said one activist.