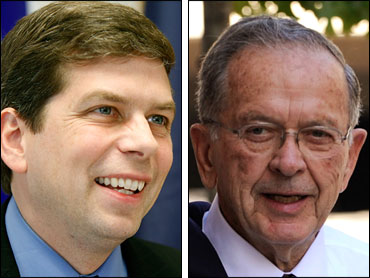 Just as Sen. Ted Stevens appeared ready to take his criminal record back to Congress - perhaps opening a door for Gov. Sarah Palin to replace him - his re-election bid faltered.

Democrat Mark Begich, who trailed Stevens by more than 3,200 votes to start the day Wednesday, jumped to an 814-vote lead as state officials resumed their count of early and absentee ballots. The tally late Wednesday was 132,196 to 131,382, with an estimated 30,000 ballots remaining to be counted, some on Friday and some next week. (Click here for the latest results)

"After watching the votes today, I remain cautiously optimistic," Begich, a two-term Anchorage mayor, said in a news release. "We ran an aggressive campaign, especially when it came to early voting and absentee."

Stevens' campaign did not immediately return a call seeking comment.

Last month, a federal jury in Washington convicted Stevens of lying on Senate disclosure forms to conceal more than $250,000 in gifts and home renovations from an oil field services company.

That might have spelled quick political doom for a lesser figure, but Stevens is revered here for his decades of public service - and especially for scoring the state enormous sums of federal money.

Begich would be the first Democrat to win a Senate race in Alaska since the mid-1970s, and a victory would put his party one step closer to a filibuster-proof 60-vote majority in the Senate. Democrats are also trying to unseat Republicans in unresolved contests in Georgia and Minnesota.

Fellow senators have called on Stevens to resign if he wins, and he could face expulsion if he declines to step down. In either case a special election would be held to determine his replacement. Palin, fresh from her failed run at the vice presidency, said Wednesday she'd be interested in serving in the Senate.

Should the result remain close a recount is possible. In Alaska, the losing candidate or a collection of 10 voters has three days to petition for a recount unless the vote was a tie, in which case it would be automatic.

If the difference between the candidates is within 0.5 percent of the total votes cast, the state pays for the recount, to be started within three days of the recount petition. The state Elections Division has 10 days to complete the recount.

If Stevens holds onto his seat, the Senate might be stuck with him for some time. As a practical matter, Stevens can't be expelled by the full Senate until after an Ethics Committee investigation and a majority vote of that panel. That won't happen until next year at the earliest.

Stevens also plans to appeal his conviction after he's sentenced, in February at the earliest. The appeal could take months or years.

President Bush could also pardon him.