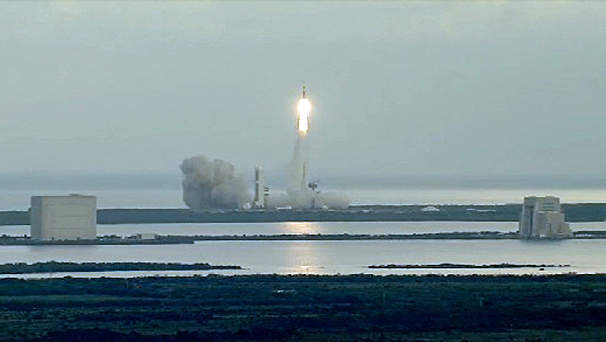 Running five days late because of stormy weather and trouble with ground equipment, a United Launch Alliance Delta 4 rocket finally thundered to life and climbed away from Cape Canaveral Monday, boosting a pair of space surveillance spacecraft toward orbit to monitor space debris and anything else that might threaten U.S. military satellites.

"Plus, they will be on the lookout for nefarious capability other nations may try to place in that critical orbital regime," Shelton was quoted as saying by Defense News. "We will learn a great deal about the geo traffic with the images produced from these two satellites."

An instant later, the 721,000-pound rocket climbed away from launch complex 37 at the Cape Canaveral Air Force Station, generating 1.2 million pounds of thrust and a long trail of brilliant flame.

Liftoff came after four back-to-back delays caused by trouble with ground equipment last Wednesday and then by afternoon storms that blocked launch tries Thursday, Friday and Saturday. After the launch was put on hold Sunday to give ground crews time off, the weather finally cooperated and the rocket took off Monday on its fifth try.

Smoothly accelerating as it consumed its load of liquid oxygen and hydrogen rocket fuel, the Delta 4 quickly arced away to the east and faded from view as it climbed out over the Atlantic Ocean. The two strap-on boosters, built by ATK, burned out about a minute and 40 seconds after liftoff, followed by shutdown of the RS-68 first stage engine just over four minutes into flight.

The spent first stage then fell away and the second stage's restartable Aerojet Rocketdyne RL10B-2 engine ignited to continue the boost to space.

As usual with many military launchings, United Launch Alliance ended video coverage and commentary five minutes into flight, well before the satellite payload reached orbit. Up to that point, there were no apparent problems, but confirmation of a successful delivery to the required orbit was not expected until later.

Perched atop the second stage were two Geosynchronous Space Situational Awareness Program, or GSSAP, satellites and a smaller experimental spacecraft known as the Automated Navigation and Guidance Experiment for Local Space, or ANGELS. All three satellites were built by Orbital Sciences Corp.

The twin GSSAP satellites are designed to fly just above and just below the 22,300-mile-high orbit where military communications stations, electronic eavesdropping satellites, weather stations and other high-priority spacecraft operate, including commercial communications satellites.

At that altitude, satellites take 24 hours to complete one orbit and thus appear to hang stationary in the sky as viewed from Earth's surface, greatly simplifying communications.

The twin GSSAP spacecraft were designed to provide real-time space surveillance, monitoring the debris environment in geosynchronous orbit "where some of our most precious satellites fly," Shelton said during a speech in February.

The Air Force currently tracks about 23,000 of an estimated half-million objects in Earth orbit, "a big traffic management problem and a big threat to fragile spacecraft," Shelton said.

"And then there are the overt threats, anything from jamming, which is actually mission affecting, obviously, all the way up through high-powered laser activity that's coming along, to kinetic ASAT (anti-satellite) activity, threats to our spacecraft that not too many years ago we didn't have to concern ourselves with."

Unveiling the previously classified GSSAP program during the February speech, Shelton said the new satellites "will present a significant improvement in space object surveillance, not only for better collision avoidance, but also for detecting threats."

"GSSAP will bolster our ability to discern when adversaries attempt to avoid detection and to discover capabilities they may have, which might be harmful to our critical assets at these higher altitudes."

He said the United States is "committed to investing in space surveillance assets like GSSAP that will directly enable safe operations, protect our spacecraft and indirectly enable a range of decisive responses that will render counter-space threats ineffective."

In 2010, the Air Force launched a Space-Based Space Surveillance pathfinder satellite to low-Earth orbit that improved tracking of spacecraft at geosynchronous altitude and enhanced "our ability to identify and attribute threatening actions to our satellites," Shelton said. "We must continue the unique capability of SBSS and build the follow-on program to sustain the capability."

According to Defense News, the space community "has raised concerns about whether GSSAP can be viewed as an offensive capability. After all, the ability to move a system around is intertwined with the goal of GSSAP -- keeping an eye on what other nations are doing in space."

Shelton said the United States clearly has the right to track other spacecraft and monitor "potentially threatening satellites."

But others say GSSAP's ability to maneuver and presumably provide detailed imagery of other spacecraft could be viewed as an offensive capability in some quarters.

"If you have the ability to get close enough to other satellites to observe or repair or refuel, then sure, you could probably take them out," Marco Caceres, an analyst with the Teal Group, told Defense News.

According to an Air Force fact sheet, the two GSSAP satellites will collect data providing "more accurate tracking and characterization of man-made orbiting objects. It will have a clear, unobstructed and distinct vantage point for viewing resident space objects orbiting Earth in a near-geosynchronous orbit without the disruption of weather or atmosphere that can limit ground-based systems."

The ANGELS satellite launched Monday is not part of the GSSAP system. It is an experimental spacecraft developed by the Air Force Research Laboratory's Space Vehicles Directorate at Kirtland Air Force Base in New Mexico.