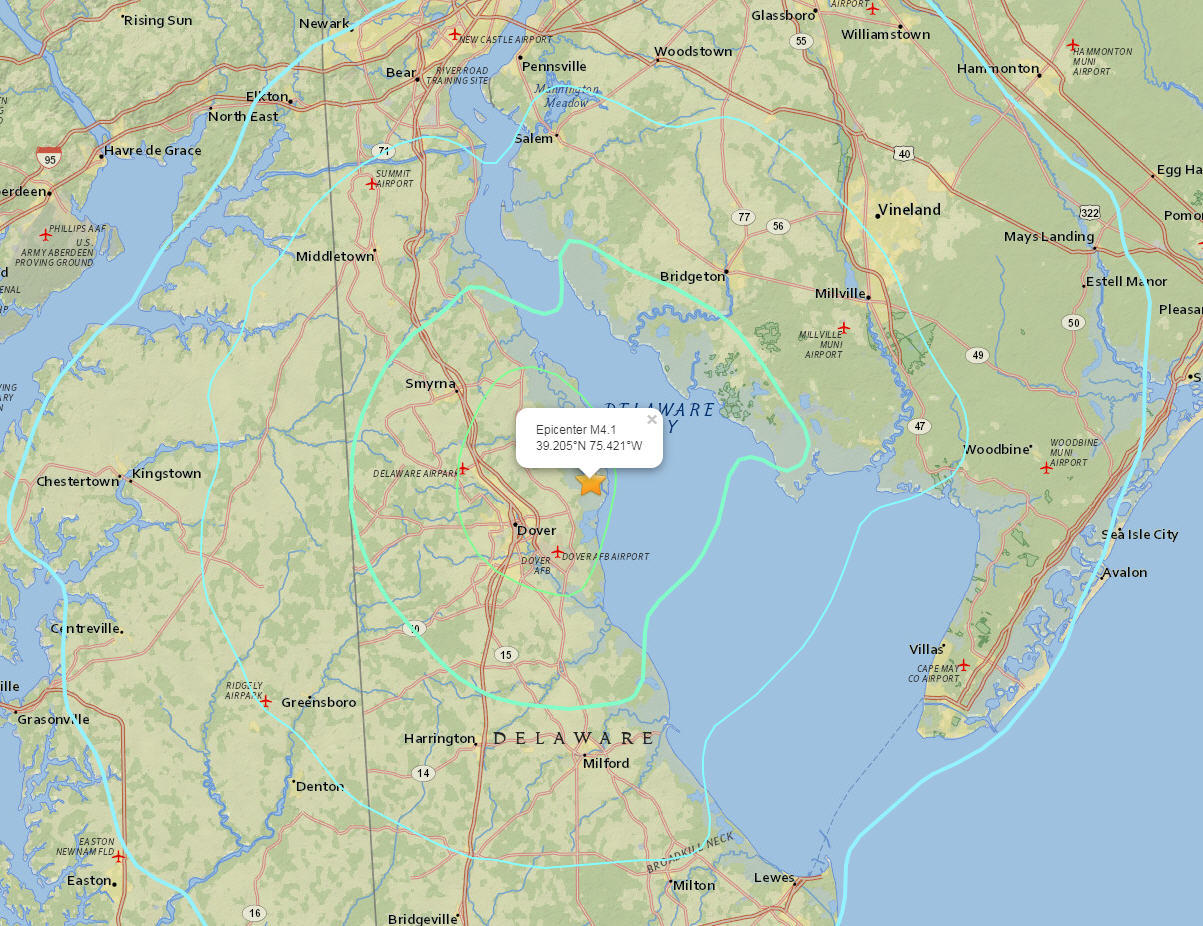 A magnitude 4.1 earthquake hit Delaware on Thursday, according to the U.S. Geological Survey. USGS says the quake struck at 4:45 p.m. ET and was centered about 6 miles east-northeast of Dover, Delaware.

People from Baltimore, Boston, New York City, New Jersey and Philadelphia felt it. USGS says the quake was shallow -- only 5 miles deep which helps amplify its effect. There were no immediate reports of injuries or damage after the jolt rattled the Mid-Atlantic region of the East Coast.

The Associated Press writes that downtown Dover was in a flurry as lawmakers and workers in the statehouse went outside to see what happened. Police and emergency officials did not have any immediate reports of damage or injuries.

"I live just a few miles south of Dover and my home rattled pretty good and I could hear the rumble as well," Dover Police Master Cpl. Mark Hoffman said, according to CBS Philadelphia. He added that everything seems to be running smoothly in Dover.

AP writes that Sgt. Rene Carberry -- a spokeswoman at Dover Air Force Base -- said people on the military installation felt it; some went outside to see if something fell down. She said there were no signs of damage at the base nor would there be any change in its operation.

CBS New York rounded up some tweets in the area that confirmed residents felt the quake Thursday:

"My house shook for about seven seconds," said Nancy Burkley, who felt the quake in Westampton Township, New Jersey, according to CBS Philadelphia.

The station also writes that Paul Caruso, a geophysicist with the USGS, says there is potential for aftershocks.

"Aftershocks are a possibility with this quake," said Caruso. "Usually the largest aftershocks we see in a series is about 1 magnitude smaller than the main earthquake."

Thursday's quake was originally reported as having a magnitude of 5.1 and then 4.4. Data from multiple monitoring stations finally registered the temblor at 4.1, according to USGS.

Some may remember the powerful Aug. 2011 earthquake that hit the East Coast which shook buildings and rattled nerves from South Carolina to Maine. The USGS said at the time that the quake registered magnitude 5.8 and was centered 40 miles northwest of Richmond, Va.

Frightened office workers spilled into the streets in New York, and parts of the White House, Capitol and Pentagon were evacuated.