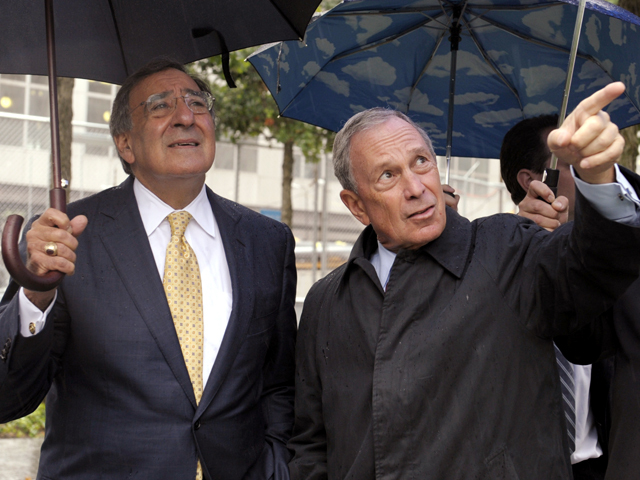 NEW YORK - After a decade of war with al Qaeda the potential for another devastating terrorist assault "remains very real," Defense Secretary Leon Panetta said Tuesday following a somber visit to ground zero of the Sept. 11 attacks on the World Trade Center.

The Pentagon chief walked through the National September 11 Memorial park and museum with Mayor Michael Bloomberg, and afterward told reporters that Americans must remain vigilant against the threat of another successful al Qaeda attack.

"The potential for that kind of attack remains very real," he said from the 10th floor of 7 World Trade Center, the first completed office tower at the site where hijacked commercial airliners were flown into the Twin Towers, killing more than 2,700 people.

Noting that many of al Qaeda's top leaders, including Osama bin Laden, have been captured or killed in recent months, Panetta said the nature of the terrorist threat has evolved to the point where al Qaeda "nodes" outside of Afghanistan and Pakistan are now the most dangerous.

"Yemen has risen to the top of the list," he said.

Panetta's New York visit gave him an early glimpse at the memorial, with its majestic 30-foot manmade walls of water that hug the sides of one-acre reflecting pools that encompass the ground where the Twin Towers stood. The water is meant to signify falling tears.

Panetta also took a peek inside the entrance to the museum, which is still under construction. And he was shown the "Survivor Tree," a non-fruit bearing pear tree that was rescued from the World Trade Center grounds after the terrorist attacks. It stands amid the white oaks, near the reflecting pool at the former South Tower.

Dozens of workers scrambled Tuesday morning to put the finishing touches on the memorial, planting ivy as ground cover around the 225 white oak trees that surround the reflecting pools.

The Sept. 11 attacks killed nearly 3,000 people, including 184 at the Pentagon. The names of every person who died in the attacks, including those at the Pentagon and in Shanksville, are inscribed in bronze panels that edge the reflecting pools at the Twin Towers site.

Panetta's spokesman, Doug Wilson, said the Pentagon chief wanted to visit Shanksville and New York to highlight the role the military has played over the past decade in preventing further attacks on the homeland. Accompanying him on his trip Tuesday were five service members — one each from the Army, Navy, Marine Corps, Air Force and Coast Guard.

The visit also recalled the most memorable event of Panetta's tenure as CIA director: the May killing of bin Laden.

Panetta will attend 9/11 memorial events at the Pentagon on Sunday.

He was a private citizen on 9/11 but happened to be on Capitol Hill at the time of the attacks, according to his press secretary, George Little.

Shanksville remains the least publicized of the three 9/11 attack sites. In its final report, the official 9/11 Commission that investigated the terrorist plot wrote a gripping account of what happened aboard Flight 93.

The commission determined that the plane, overtaken by four hijackers, slammed into the ground at 11 seconds past 10:03 EDT, on a path over Pennsylvania toward its intended target in Washington — either the Capitol or the White House.

It departed from Newark, N.J., bound for San Francisco, at 8:42 a.m. The hijackers took over the cockpit 46 minutes later. At 9:57 a.m., a passenger revolt began. The cockpit voice recorder captured sounds of the passenger assault.

"Some family members listening to the recording report that they can hear the voice of a loved one among the din," the 9/11 Commission report said.

Within minutes, the hijackers apparently determined they were about to be overpowered and decided to abort their mission and destroy the plane. "The aircraft plowed into an empty field in Shanksville, Pa., at 580 mph, about 20 minutes' flying time from Washington, D.C," the report said.