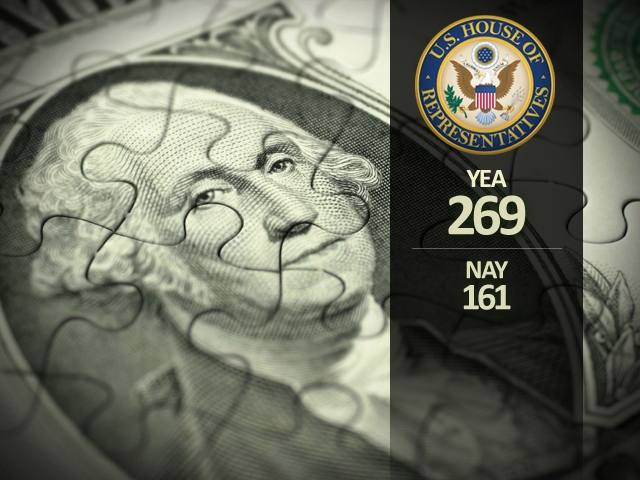 The House on Monday voted to approve a deal to raise the debt limit, voting 269-161 for a bill that would cut government spending by trillions and effectively raise the debt ceiling through the end of 2012.

The bill, which was brokered Sunday night in last-minute negotiations between the White House and congressional leaders, passed with the support of 174 Republicans and 95 Democrats.

Among those who supported the bill was Rep. Gabrielle Giffords, D-Ariz., who returned to Washington for the vote. This was Giffords' first vote in Congress since the January 8th shooting in Tucson, Arizona, in which she was seriously wounded.

Lawmakers offered Giffords a standing ovation on the House floor when she showed up for the vote. After it was completed, House Democratic Leader Nancy Pelosi said Giffords' name inspires the love and admiration of Americans and called the lawmaker the "personification of courage."

"Thank you, Gabby," Pelosi added. Giffords, her hair short, waved and thanked members as they applauded the sentiment.

Giffords said in a statement that she "closely followed the debate over our debt ceiling and have been deeply disappointed at what's going on in Washington."

Before the vote, House Minority Leader Nancy Pelosi said "it's hard to believe we are putting our best foot forward with the legislation that comes before us today."

A number of Tea Party-linked Republicans voted against the legislation because they felt it failed to go far enough, while some progressive Democrats voted against it because they said the plan was tilted toward GOP interests. But a majority of lawmakers overcame their misgivings about the measure to pass it ahead of tomorrow's deadline to increase the nation's $14.3 trillion debt limit or face economic catastrophe.

Some House Democrats also delayed their votes until it was clear how many Republicans would vote for the plan.

But, she noted, "I'm proud of some of the accomplishments contained with it and that's why I'm voting for it."

The plan will cut nearly $1 trillion in government spending over the next 10 years and raise the amount of money the U.S. is legally allowed to borrow by enough to avoid another showdown on the matter before next year's presidential election.

It will also create a special congressional committee of a dozen members -- three from each party from the House and the Senate - that would be tasked with coming up with recommendations for $1.5 trillion in further deficit reductions by Thanksgiving. Those reductions could include cuts from defense and social safety net programs, as well as changes to the tax code. If the recommendations are not created or approved by Congress by the end of the year, there will be more than $1 trillion automatic spending cuts unless a balanced budget amendment to the Constitution is sent to the states.

In remarks on the House floor prior to the Monday evening vote, Minority Whip Rep. Steny Hoyer, D-Md., who voted for the bill, accused the Tea Party of taking the American economy "hostage" and expressed his hope that the bipartisan congressional committee determining the second round of cuts would consider the "priorities of this nation."

"For the first time in American history the radical right has held the economy hostage," he said. "Hopefully the [super congressional] committee will accurately reflect the priorities of this nation."

Rep. Steve Cohen, D-Tenn., called the bill a "Trojan horse" and said he could not vote for legislation that included a "series of cuts we don't know."

White House sells debt deal ahead of congressional voteMcCain: I'd "swallow hard" on defense cutsDebt deal could boost Obama in 2012

"The first series of cuts we know, the second series of cuts we don't know," he said in a speech on the House floor. "I fear it's a Trojan horse...That's an Odysseyan journey that this country should not have to traverse."

CBS News' John Nolen reports that the Senate will vote on the debt plan at noon on Tuesday. The bill is expected to pass the Senate and be signed into law by the president soon afterward.