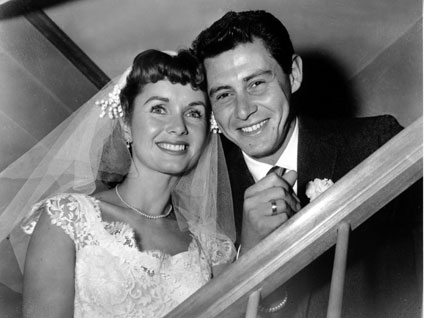 (CBS) Eddie Fisher, the 1950s singer who died Wednesday in Los Angeles, was known more for his multiple marriages than for his musical career.

Actress Debbie Reynolds was his first wife. The two were married in 1955 at a resort in the Catskills and had two children together. They were considered America's sweethearts until 1959 when, in a scandal that rocked Hollywood, Fisher divorced Reynolds to marry actress Elizabeth Taylor, the widow of his best friend Mike Todd.

In what some saw as a case of fitting retribution, Taylor dumped Fisher five years later to marry her "Cleopatra" co-star- British actor Richard Burton.

Fisher married perky blonde actress Connie Stevens, in 1969 and they had two daughters. Another divorce followed. His fourth marriage to Terry Richard in 1975 lasted just six months and ended in divorce.