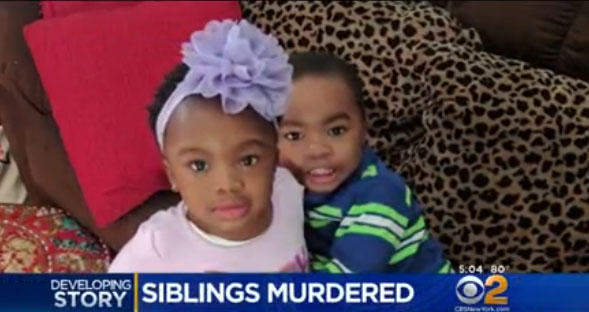 3-year-old Micah Gee and his 2-year-old sister Olivia died as a result of blunt force trauma to the torso. Investigators are reportedly working to determine the cause of the children's fatal injuries.

Sources tell the station their mother, 31-year-old Jade Spencer, told police that the toddlers went to bed before her boyfriend got to their Bronx apartment around 9:30 p.m. Sunday.

She reportedly said they smoked marijuana, drank beer and watched a movie before falling asleep. The station reports she said the boyfriend, 31-year-old Novell Jordan, told her something was wrong with the children at around 1:15 a.m. Monday.

Both toddlers had severe asthma and the mother said Micah was having trouble breathing. Olivia was unresponsive and both had injuries to their necks.

The New York Times reports Spencer called 911. The toddlers were taken to a hospital, where they were later pronounced dead – Olivia reportedly just three minutes before her brother.

The simultaneous deaths raised immediate suspicions among investigators who saw bruising on their bodies and were skeptical they had died of natural causes, the paper reports.

"They're defenseless," neighbor Edith Brownbroyant told CBS New York. "There's nothing they could do to hurt you. Why would you want to hurt them?"

Both Spencer and Jordan were questioned by police Monday. Spencer was taken to a hospital for a psychiatric evaluation, where she remained Tuesday evening.

Jordan has retained an attorney and police are now consulting with the Bronx District Attorney as to how to proceed in the investigation, the station reports.