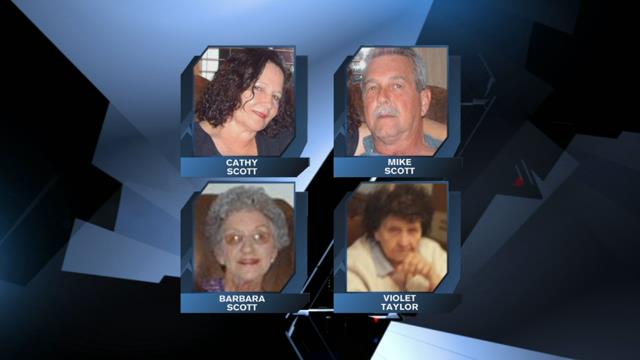 The victims, Cathy Scott, 60; her husband, Mike Scott, 58; Mike Scott's mother, Barbara Scott, 80; and Cathy Scott's mother, Violet Taylor, 82, were all shot to death, according to the Anderson County coroner. They all lived together in the home where their bodies were found, deputies said.

There are two homes located on the property, but deputies focused their investigation on one of them.

On Tuesday, deputies said the deaths were being investigated as a quadruple murder. Forensics investigators returned to the scene Tuesday to search for evidence.

Michael Scott had texted his boss on Sunday to say that he would be at work on Monday. A family member came to the house at 3:30 p.m. Sunday, but no one appeared to be home.

Amy Vilardy, a daughter of one of the victim's, said that the family usually had a big meal on Sunday around noon. And Shore said the autopsies showed that Michael and Cathy each ate a large meal about an hour before their deaths.

There was no forced entry into the home. Deputies have not said if there are suspects in the case.