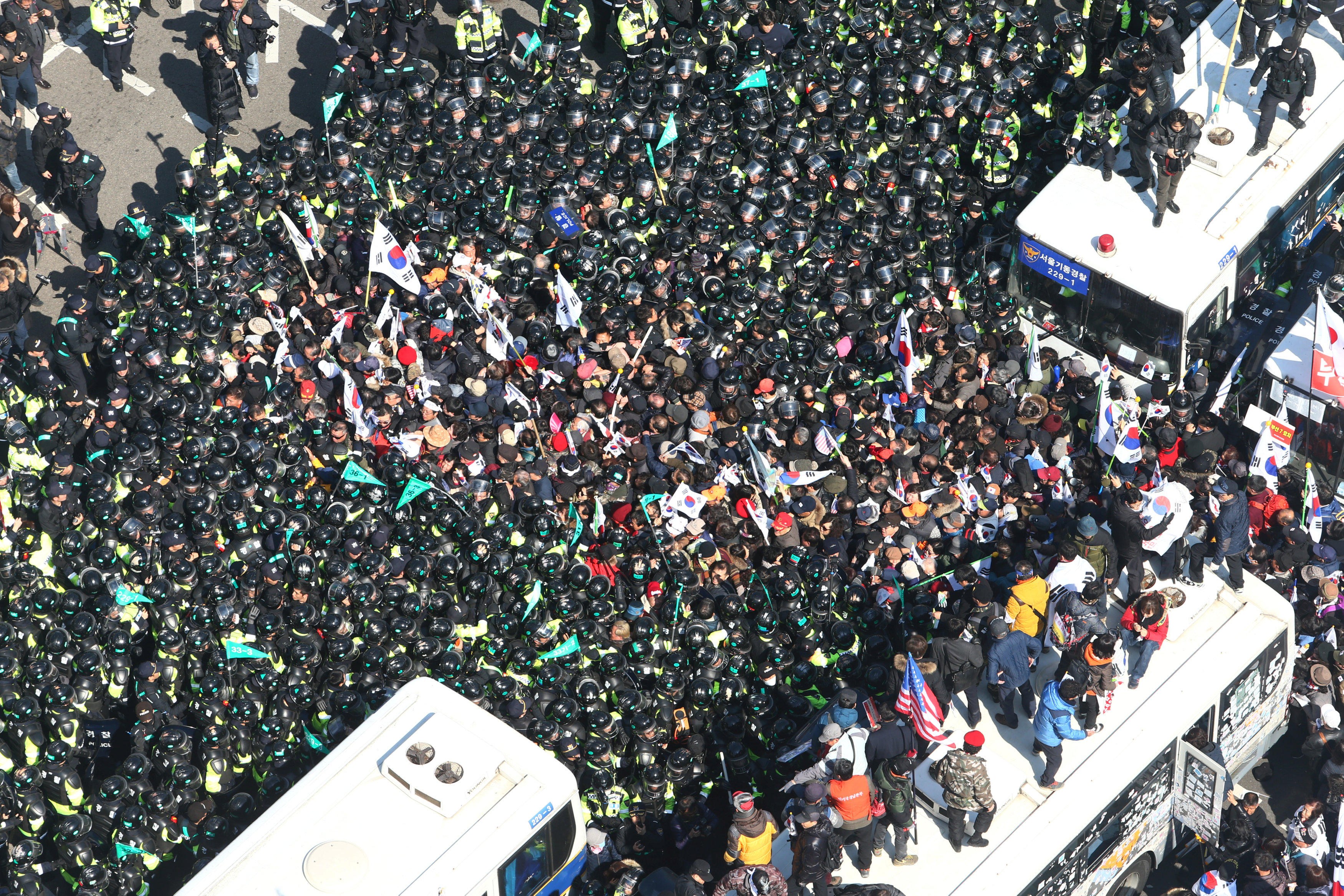 Two men later died during protests against the court’s decision, which capped a stunning fall for Park, the country’s first female leader who rode a wave of lingering conservative nostalgia for her late dictator father to victory in 2012, only to see her presidency crumble as millions of furious protesters filled the nation’s streets.

Demonstrators for and against the court’s ruling took to the streets after it was handed down.

Some of Park’s supporters reacted with anger, shouting and hitting police officers and reporters and climbing on police buses used to create a perimeter to protect the court. Police say protesters also smashed the windows of several buses.

Anti-Park protesters celebrated by marching in the streets near the presidential Blue House, carrying flags, signs and an effigy of Park dressed in prison clothes and tied up with rope.

An official from the Seoul National University Hospital said a man in his 70s believed to be a Park backer died from head wounds after falling from the top of a police bus.

An official from the Kangbuk Samsung Hospital in Seoul said another man brought from the pro-Park rally died shortly after receiving CPR at the hospital. The hospital official couldn’t immediately confirm the cause of death.

Police and hospital officials said about 30 protesters and police officers were hurt in the violent clashes near the court.

The nation’s acting head of state pleaded with Park foes and backers to end the fierce demonstrations, which divided Seoul’s streets. The comments from Prime Minister Hwang Kyo-ahn came hours after the two deaths.

Hwang has served as the government caretaker since lawmakers voted to impeach Park in December.

Friday night, tens of thousands of South Koreans occupied a square in front of an old palace gate in Seoul to celebrate Park’s ouster. Carrying signs and candles, the crowd cheered to speeches and swayed to music Friday night, while angry Park supporters of Park continued to scuffle with police in streets near the court.

Park didn’t vacate the Blue House on Friday as her aides prepared for her return to her private home in southern Seoul, according to the Blue House. Park wasn’t planning any statement on Friday, it said.

The ruling by the eight-member panel opens Park up to possible criminal proceedings - prosecutors have already named her a criminal suspect - and makes her South Korea’s first democratically elected leader to be removed from office since democracy replaced dictatorship in the late 1980s.

It also deepens South Korea’s political and security uncertainty as the country faces existential threats from perennial rival North Korea, reported economic retaliation from a China furious about Seoul’s cooperation with the U.S. on an anti-missile system, and questions in Seoul about the new Trump administration’s commitment to the countries’ decades-long security alliance.

South Korea’s defense minister ordered the military to be on alert for possible North Korean provocations attempting to exploit “unstable situations at home and abroad.”

North Korea’s state-run Korean Central News Agency published a short dispatch on the court ruling in Seoul, anticipating that Park will now come under investigation as a “regular criminal.” Park’s removal from office opens her up to possible prosecution.

The Reuters news agency points out that the report “was published uncharacteristically quickly for North Korean state media, which usually waits days before releasing foreign news.”

The United States says Park’s removal is a domestic issue that doesn’t affect its strong alliance with Seoul.

State Department spokesman Mark Toner says the U.S. will continue to work with the Acting President Hwang and looks forward to whomever South Koreans elect as their next president.

But Seoul worries about the Trump administration asking for a greater financial contribution for U.S. troop deployment in the South.

Park’s lawyer, Seo Seok-gu, who had previously compared Park’s impeachment to the crucifixion of Jesus Christ, called the verdict a “tragic decision” made under popular pressure and questioned the fairness of what he called a “kangaroo court.”

South Korea must now hold an election within two months to choose Park’s successor. Liberal Moon Jae-in, who lost to Park in the 2012 election, currently enjoys a comfortable lead in opinion surveys.

Pre-verdict surveys showed that 70 to 80 percent of South Koreans wanted the court to approve Park’s impeachment. But there have been worries that Park’s ouster would further polarize the country and cause violence between her supporters and opponents.

Sensing history, thousands of people - both pro-Park supporters, many of them dressed in army-style fatigues and wearing red berets, and those who wanted Park gone - gathered around the Constitutional Court building and a huge public square in downtown Seoul.

A big television screen was set up near the court so people could watch the verdict live. Hundreds of police were on hand, wearing helmets with visors and black, hard-plastic breastplates and shin guards. The streets near the court were lined with police buses and barricades.

Park’s parliamentary impeachment in December came after weeks of Saturday rallies that drew millions who wanted her resignation. Overwhelmed by the biggest rallies in decades, the voices of Park supporters were largely ignored. But they’ve recently regrouped and staged fierce pro-Park rallies since.

People on both sides have threatened not to accept a Constitutional Court decision that they disagree with. One of Park’s lawyers told the court last month that there will be “a rebellion and blood will drench the asphalt” if Park is booted from office. Many participants at anti-Park rallies had said they would stage a “revolution” if the court rejected Park’s impeachment.

“If Park accepts the ruling and soothes those who opposed her impeachment, things will be quiet,” said Yoon Tae-Ryong, a political scientist at Seoul’s Konkuk University. “But looking at what she’s done so far, I think that might be wishful thinking.”

Others disagreed, saying violent protests won’t be supported by the general public.

Prosecutors have arrested and indicted a slew of high-profile figures over the scandal, including Park’s confidante Choi Soon-sil, top Park administration officials and Samsung heir Lee Jae-yong. But Park has avoided a direct investigation thanks to a law that gives a sitting president immunity from prosecution for most of alleged crimes.

Since she’s now no longer in power, prosecutors can summon, question and possibly arrest her. Her critics want to see Park appear on TV while dressed in prison garb, handcuffed and bound like others involved in the scandal. But some analysts worry that could create a backlash by conservatives ahead of the presidential vote.

Even after the election, imprisoning Park could still be a burden for a new government, which must pursue national unity to overcome security, economic and other problems, said Chung Jin-young, a professor at Kyung Hee University. Others say it won’t be difficult.

Park rose to power in 2012 largely thanks to the support of voters who believed her father guided the country out of poverty after the 1950-53 Korean War and that his daughter would show the same charismatic leadership to revive the economy.

But her father was also a burden, as many here remember him as a ruthless thug. These critics have linked her alleged unclear and high-handed decision-making and attempts to infringe upon freedom of speech to her father’s high-handed style.

“The nostalgia for Park Chung-hee’s developmental dictatorship, which has existed as a sort of myth since the ‘60s, has been shattered along with Park Geun-hye’s impeachment,” said Lim Jie-Hyun, a professor at Sogang University. “When people voted for Park Geun-hye, they didn’t do so because of her.”

Park Geun-hye has offered a public apology several times and acknowledged she got some help from Choi for editing speeches and on what she called public relations. But Park has denied any legal wrongdoing.

The two women became friends in the 1970s, around the time when Park began serving as first lady after her mother was killed during a failed 1974 assassination attempt on her father. Park Geun-hye said Choi helped her “when I had difficulties” in the past. Park and Choi had 573 phone calls between April 18, 2016, and Oct. 26, 2016, according to an investigation report by prosecutors.

Some media reports said the acting president might run for president as a conservative candidate. If that happens, he would have to resign to run and a deputy prime minister would become interim leader.

In 2004, then President Roh Moo-hyun was impeached by parliament for alleged election law violations and incompetence, but the Constitutional Court later reinstated his power.