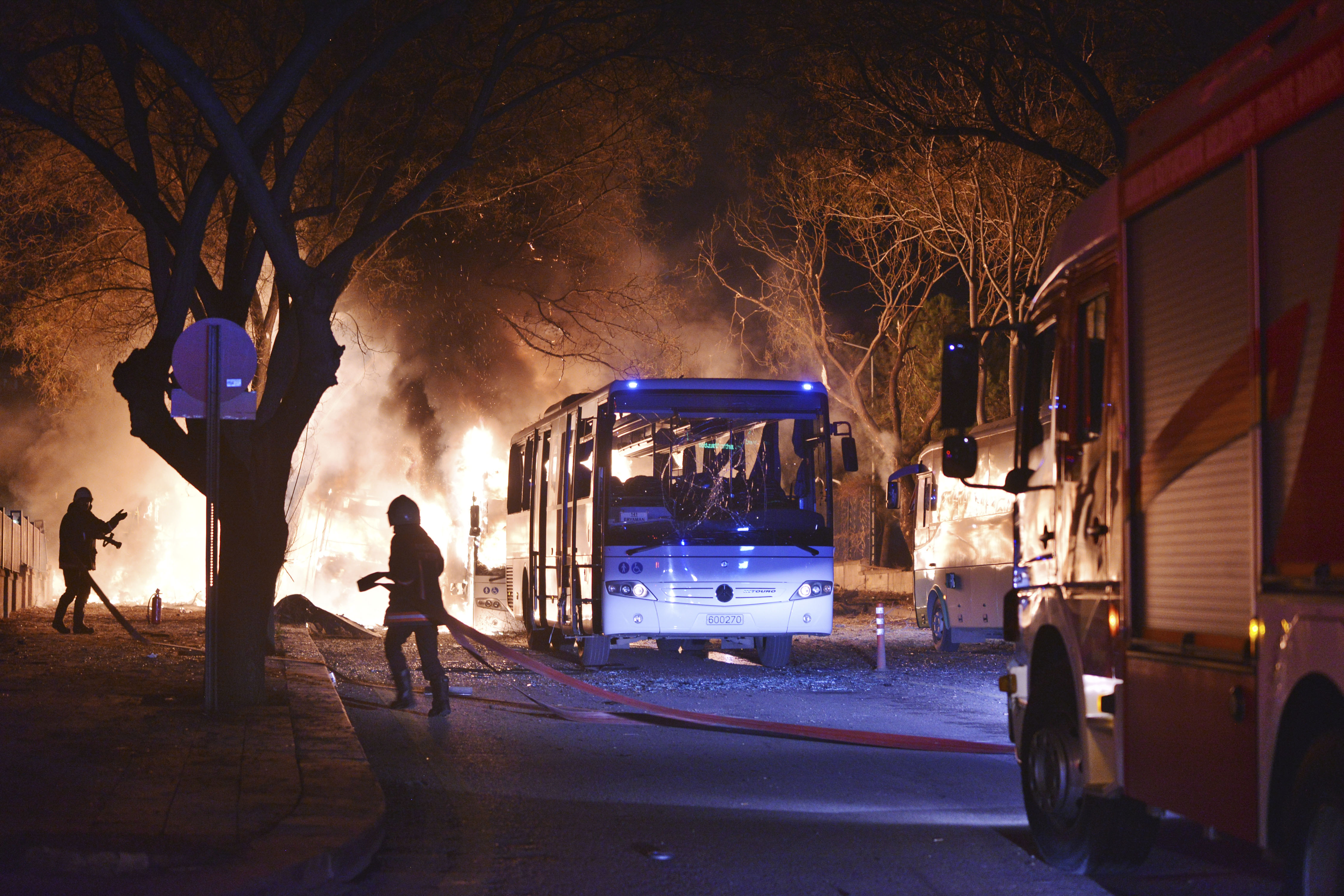 ANKARA, Turkey -- A car bomb went off in the Turkish capital Wednesday near vehicles carrying military personnel, killing at least 28 people and wounding 61 others, officials said.

The explosion occurred during evening rush hour in the heart of Ankara, in an area close to parliament and armed forces headquarters and lodgings. Buses carrying military personnel were targeted while waiting at traffic lights at an intersection, the Turkish military said while condemning the "contemptible and dastardly" attack.

"We believe that those who lost their lives included our military brothers as well as civilians," Deputy Prime Minister Numan Kurtulmus said.

At least two military vehicles caught fire and dozens of ambulances were sent to the scene. Dark smoke could be seen billowing from a distance.

There was no immediate claim of responsibility, but Kurtulmus pledged that authorities would find those behind the bombing. He said the government had appointed seven prosecutors to investigate the attack, which he described as being "well-planned."

Kurdish rebels, the Islamic State of Iraq and Syria (ISIS) and a leftist extremist group have carried out attacks in the country recently. In October, suicide bombings blamed on ISIS targeted a peace rally outside the main train station in Ankara, killing 102 people in Turkey's deadliest attack in years.

Turkey is determined to fight those who carried out the attack as well as the "forces" behind the assailants, he said.

"Our determination to retaliate to attacks that aim against our unity and future grows stronger with every action," Erdogan said. "It must be known that Turkey will not refrain from using its right to self-defense at all times."

Wednesday's attack comes at a tense time when the Turkish government is facing an array of challenges. A fragile peace process with Kurdish rebels collapsed in the summer and renewed fighting has displaced tens of thousands of civilians.

"The United States condemns in the strongest terms the attack today in Ankara, Turkey. Our thoughts and prayers are with the families and loved ones of all those who have been killed and with those injured, including members of the Turkish military," the statement read. "We stand together with Turkey, a NATO Ally, a strong partner, and a valued member of the Counter-ISIL coalition, in the face of this attack and pledge our ongoing cooperation and support in the fight against terrorism."

Turkey has also been helping efforts led by the United States to combat ISIS in neighboring Syria, and has faced several deadly bombings in the last year that were blamed on IS.

The Syrian war is raging along Turkey's southern border. Recent airstrikes by Russian and Syrian forces have prompted tens of thousands of Syrian refugees to flee to Turkey's border. Turkey so far has refused to let them in, despite being urged to do so by the United Nations and European nations, but is sending aid to Syrian refugee camps right across the border.

Turkey, which is already home to 2.5 million Syrian refugees, has also been a key focus of European Union efforts to halt the biggest flow of refugees to the continent since World War II. Hundreds, sometimes thousands, of refugees leave every night from Turkey to cross the sea to Greece in smugglers' boats.

NATO Secretary General Jens Stoltenberg strongly condemned the "terrorist attack" and offered his condolences to the families of the victims. Stoltenberg said there can be no justification "for such horrific acts" and that "NATO Allies stand shoulder to shoulder in the fight against terrorism."

German Chancellor Angela Merkel said: "In the battle against those responsible for these inhuman acts we are on the side of Turkey."

Washington also condemned the attack, according to a statement by Mark Toner, deputy spokesman of the U.S. State Department.

"We reaffirm our strong partnership with our NATO Ally Turkey in combatting the shared threat of terrorism," Toner said.

After the attack, Turkish Prime Minister Ahmet Davutoglu canceled a visit to Brussels Wednesday evening and attended a security meeting with Erdogan and other officials. Erdogan postponed a trip to Azerbaijan planned for Thursday.

The government meanwhile, imposed a gag order which bans media organizations from broadcasting or printing graphic images of the dead or injured from the scene of the explosion and also banned reporting on any details of the investigation. Turkey has imposed similar bans after previous attacks.

Last month, 11 German tourists were killed after a suicide bomber affiliated with the IS detonated a bomb in Istanbul's historic Sultanahmet district. More than 30 people were killed in a suicide attack in the town of Suruc, near Turkey's border with Syria, in July.