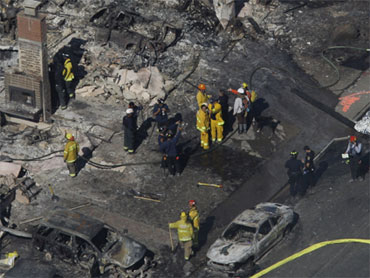 Fire crews tried to douse the remnants of an enormous blaze and account for the residents of dozens of homes Friday after a gas line ruptured and an explosion ripped through in a neighborhood near San Francisco, killing at least four people and likely more.

Crews with dogs went house to house in the neighborhood Friday morning, and officials said there could be more casualties. Homes were left with just chimneys standing and smoke still rose from blocks of smoldering wreckage.

"It was pretty devastating," said Fire Chief Dennis Haag. "It looks like a moonscape in some areas."

Haag said a quarter of the homes burned by the enormous blaze are still too hot to search.

Haag added that they're still not able to access the site of the ruptured gas line because it's covered with water.

At least 50 people were hurt, with eight in critical condition at are hospitals. The explosion Thursday evening that left a giant crater and sent flames tearing through the middle-class neighborhood of 1960s-era homes in hills overlooking San Francisco, the bay and the airport.

Police are blocking people from approaching the burn area, saying it's being treated as a crime scene.

Christina Veraflor, 41, of Napa, grew up in the neighborhood and said Friday morning that her 67-year-old mother's house was destroyed. Her mother, who had lived in the home for 40 years, was at the movies when the neighborhood erupted in flames.

"I woke up this morning and said, 'I'll go to my mom's and get this and get that.' But there is no mom's anymore," Veraflor said.

Pacific Gas and Electric Co. President Chris Johns said Friday morning a steel gas pipe ruptured about three feet (a meter) underground just before 6:30 p.m Thursday, but crews still haven't been able to determine the cause of the rupture or the ensuing blast because they can't get close enough. The damaged section was isolated and gas flow to the area has been stopped. The blaze was 75 percent contained by midmorning, fire officials said.

Veraflor said she smelled gas at the house during a visit six weeks ago but did not report the smell to the utility.

"You'd get a whiff of it, and it would dissipate," she said.

Johns said the company has heard the reports that some residents smelled gas in the area before the blast.

"Right now, we haven't got confirmation about that, but we have records that we are going back right this minute to try to confirm what exactly those phone calls look like and when they occurred, and we will report back as soon as we know something."

After the initial blast, flames reached as high as 100 feet (30 meters) as the fire fueled itself on burning homes, leaving some in total ruins and reducing parked automobiles to burned out hulks.

It's not the first time a deadly explosion on a PG&E gas line has devastated a Northern California neighborhood.

On Christmas Eve 2008 an explosion killed a 72-year-old man in the Sacramento suburb of Rancho Cordova, destroyed one home and seriously damaged others.

The National Transportation Safety Board's final report said PG&E used a wrong pipe to repair the gas line two years before the explosion. Rancho Cordova residents had reported of a gas smell in the area before the blast.

In response to the NTSB's findings, the company said it had taken "extraordinary measures" to ensure a blast like that would never happen again.

The NTSB has sent a four-member team to San Bruno to investigate Thursday's blast.

Haag said crews walked through the neighborhood Friday morning and revised the damage estimate to 38 structures destroyed and seven significantly damaged. Dozens of other homes suffered less severe damage in the fire, which burned 15 acres.

Gov. Abel Maldonado, acting governor while Gov. Arnold Schwarzenegger was in Asia on a trade mission, declared a state of emergency in San Mateo County.

Rep. Jackie Speier, a Democrat who represents San Mateo County, said she was working to secure federal disaster assistance for residents and businesses affected by the fire.

"This is an extraordinary community, it's extremely tight-knit. Generations of families have lived here forever. And we will all come together. We will restore the homes and lives of all these people."

Stephanie Mullen, Associated Press news editor for photos based in San Francisco, was attending children's soccer practice with her two children and husband at Crestmoor High School when she saw the blast at 6:14 p.m.

"First, it was a low deep roar and everybody looked up, and we all knew something big was happening," she said. "Then there was a huge explosion with a ball of fire that went up behind the high school several thousand feet into the sky.

(CBS)
Several minutes later, Mullen was near the fire scene, about a half-mile away. She said she could feel the heat of the fire on her face although she was three or four blocks away from the blaze. It appeared the fireball was big enough to have engulfed at least several homes.

"I could see families in the backyards of the homes next to where the fire was, bundling their children and trying to get them out of the backyards," she recounted.

She said people in the neighborhood were yelling, "This is awful" and "My family is down there."

Long-time resident Bob Pellegrini didn't need anyone telling him to leave: "I've never ever felt heat that intense, ever," he told CBS News. "It was like hell on earth, it really was. All you see is 80-foot flames, and intense flames."

On "The Early Show" this morning, Woody Baker-Cohn of the American Red Cross said residents who had no place to go were housed in shelters over night and provided with medical assistance.

Adam Broadway had just dropped his 8-year-old son off at a nearby soccer game about 6:00 p.m. last night when he first saw the smoke plume.

"Having just moved over from Australia and experienced major bush fires that devastated my home over there, I was really paranoid," he told "The Early Show." "So I quickly jumped in the car, got up to the road, and people were everywhere. There was fireballs billowing up out of the ground. We could see the smoke plume just building and building and building. And all of the residents were coming out.

"People were talking about how their homes had shaken. There was a lot of confusion, and police were just coming on the scene. There [were] suggestions that it was a light aircraft that had crashed. Subsequently San Francisco airport had accounted for all the planes, so we realized it was something else. It was just a real confusion in the air. People everywhere on phones, talking about, well, 'Are my friends and family okay?"