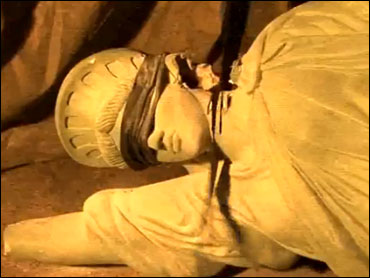 NEW YORK (AP) A replica Statue of Liberty stolen from a New York City coffee shop has apparently turned up in a video that shows it blindfolded, beheaded and smashed to pieces.

The video includes slogans like "We don't want your freedom" and "Death to America" flashing in 1980s video game font on the screen, according to The Daily News. The paper says police are investigating.

The video, staged to resemble a videotaped beheading by terrorists, was posted to YouTube anonymously on July 4.

The Daily News says a copy of it was also sent to the newspaper and to the Brooklyn coffee shop's owner.