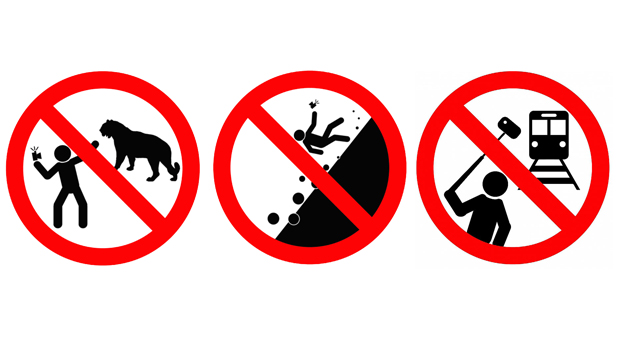 Think before you take that next selfie: It could actually be a matter of life-or-death, or so says our contributor Faith Salie:

Last year, more people died from selfies than shark attacks. And many more have been injured by taking their own picture.


Deaths have been caused by distracted photo-takers falling off cliffs, crashing cars, being hit by trains and shooting themselves while posing with guns.

Things have gotten so bad that Mumbai has outlawed selfies after 19 deaths in India. Pamplona officials have banned them during the annual Running of the Bulls.

Now might be a good time to note that while gals take more selfies than guys, 75% of selfie victims are MEN.

These untimely deaths are sad, and I feel sorry for those left behind. But really, death by selfie is a low-hanging fruit of a metaphor. Because selfies are killing our experiences.

We're obsessed with proving that we HAD experiences, rather than appreciating them as they occur. We cannot admire a breathtaking mountain without inserting ourselves into the scenery.

It's not enough to see the Mona Lisa; we have to photobomb her. You know what's made the Mona Lisa so compelling through the centuries? She has an air of something called "mystery"; we don't know quite why she's smiling. But we know why YOU'RE smiling! You're smiling because you're about to post photographic evidence that you're at the Louvre, y'all!

We're not living in the moment; we're making sure we can demonstrate we HAD the moment to everyone we know (and don't know).

Not only are we killing our experiences this way, we're also dispatching our memories. I recently interviewed a doctor who works with memory who told me she thinks we're outsourcing it to technology. We rely on a "cloud" to capture what's happened to us rather than absorbing it into our souls. We aren't allowing ourselves to have an experience we can hold in our mind and turn into stories we can share. Not by Instagram, but by mouth.

We're losing the art of telling someone a story.

I'm not a selfie taker -- no, thanks -- but I'm guilty of this. Not too long ago, I took my one-year-old to the petting zoo. And I was so focused on finding the best angle to film her that I barely got to see the way she giggled through her first encounter with a llama. I realized I should just put my "smart" phone away and enjoy my time with her. She's not really going to care if I didn't get a video of her being licked by an ungulate.

May we all hope to live in a more selfie-less society. (Or maybe the Syfy "Sharknado" series will give way to a cautionary horror franchise called "Selfienado.")

At least we can say this: those departed selfie victims died doing what they love.