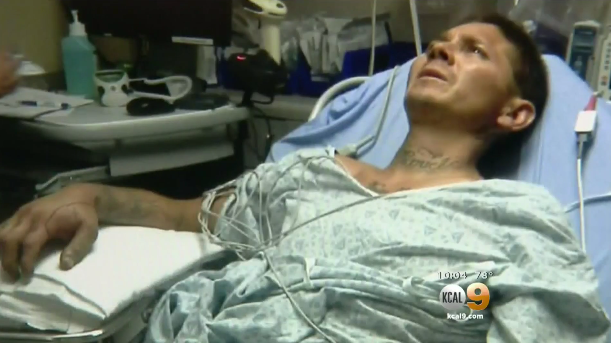 LAKE ELSINORE, Calif. -- A California man was bitten by a rattlesnake after he picked it up to try and take a selfie with it, reports CBS Los Angeles.

Alex Gomez, 36, a father of three, had spotted the rattlesnake by his family's home. And as a result of picking the snake up, he may lose his hand or some fingers.

"It could've bit his neck, and that would have been it. That's just being a fool," Alex's mother Deborah said to CBS Los Angeles.

Alex's nephew was there when his uncle discovered the four-foot snake.

"It was rattling," his nephew said. "It was pretty mad."

After he was bitten, Alex experienced excruciating pain. He was taken to the hospital where his hand swelled up and his body began to tingle.

"His skin is already rotting away," Deborah said.

California Poison Control reports handling 800 rattlesnake bites per year, and one or two end up being fatal. CBS Los Angeles reports that Alex was bitten during peak rattlesnake bite season, which runs from April to October.

Due to the drought and the heat the rattlesnake issue has been worse this year.

Alex's mother says her son is embarrassed. But still, Deborah isn't being easy on her son for the decision to pick the snake up.

"I told him the news people had been calling, and he said 'Mom, you better not', and I said 'I'm going to'. I'm going to teach him a real good lesson when he gets home. No mercy for him."