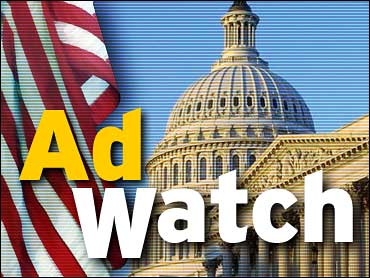 
In its third ad in the past two weeks, the secretive 527 group Americans for Jobs, Healthcare & Progressive Values (AJHPV) brings out its harshest attacks to date against Howard Dean.

The ad's sole visual is a slowly moving shot of a Time Magazine cover featuring Osama bin Laden. As the picture zooms in on a close-up of bin Laden's eyes, the announcer intones, "Howard Dean just cannot compete with George Bush on foreign policy." The ad concludes by asking Democrats – presumably those who currently support Dean - to "think about that … and think about it now."

The ad began airing in New Hampshire and South Carolina on Saturday, before the capture of Saddam Hussein. Two other AJHPV anti-Dean ads have aired in Iowa, both ending with a domestic variation of the Osama warning: "If you thought Howard Dean had a progressive record … check the facts … and think again." Overall, AJHPV has pledged to spend $400,000 on advertising in Iowa.

If the harsh criticism of Dean were not enough to make the ad of interest, a controversy over AJHPV's funding has drawn further attention. AJHPV has refused to disclose its financial backers and the IRS does not require 527s to file until January 31, after the first two make-or-break primaries.

At the moment, it appears that the group has more than a passing connection with one of Dean's opponents, Missouri Rep. Dick Gephardt. The group's new president, former Rep. Ed Feighan, has contributed $2,000 to the Gephardt presidential campaign, and former Gephardt fund-raiser David Jones is the group's treasurer. The Washington Post reported that the Gephardt-endorsing Machinists Union has made a "substantial contribution" to AJHPV. Leo Hindery, Gephardt's national finance co-chair, is also a "backer of AJHPV."

Gephardt campaign press secretary Erik Smith tells CBS News that the campaign "has no involvement at all" with AJHPV, although they have pointed reporters to the group's Web site. On a conference call today, Gephardt told reporters, "I haven't seen the ads and I have no knowledge of who is doing this and why they're doing it. For my part, I wish they would reveal who is doing this through the organization. I led the fight for campaign finance reform and, as part of that, we put additional requirements on reporting from 527 organizations. If I wanted to run ads of this kind, I would run them."

AJHPV's new spokesman is former John Kerry press secretary Robert Gibbs, who left the Massachusetts senator's campaign when his boss, Jim Jordan, was fired. The Kerry camp also denies any connection with the 527 group. Both the Gephardt and Kerry campaigns have gone on the air with positive ads this week, leaving the Dean bashing to AJHPV.

Making lemonade out of lemons, the Dean campaign is using the anti-Dean ad to raise money. Dean for America put up a fundraising "bat" on its Web site designed to turn his supporters' ire at the attacks into cold, hard cash. The Web site features a full rundown of the ad and its surrounding controversy, explaining that "Democrats are better than this" and urging supporters to contribute to "show that we're going to keep fighting." So far the ad has brought in $459,541 for Dean.

Audio:
We live in a very dangerous world.

Americans want a president who can face the dangers ahead.

But Howard Dean has no military or foreign policy experience.

Video:
Slow move in on cover of Time magazine with Bin Laden on the cover. SUPER comes up: Dangerous world.

Move in continues … SUPER comes up: Destroy us

Move in continues … SUPER comes up: Dangers Ahead

Move in continues … SUPER comes up: No Experience

Continue to move in until we get into his eyes and screen turns black.

SUPER: It's time for Democrats to think about Dean's inexperience.

SUPER: Think about it now. Paid for by Americans for Jobs, Healthcare and Progressive Values.