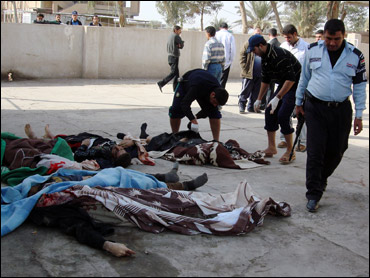 A suicide bombing northeast of the capital and a car bombing in Baghdad on Thursday shattered the calm of an otherwise unusually peaceful holiday period in Iraq. Authorities said 19 people were killed in the two attacks, including a U.S. soldier.

The suicide bomber struck in Kanaan, a Shiite-dominated town near the city of Baqouba in Diyala province, about 35 miles northeast of Baghdad. He detonated his explosives as a U.S. patrol was about to enter a building where a city council meeting was to be held, the U.S. military said.

The U.S. military said one soldier and five civilians were killed, and that 10 more soldiers and one Iraqi were wounded. However, local police and the hospital morgue in Baqouba said 13 people were killed at the scene. An official with the morgue, who asked not to be identified as he was not authorized to release the information, said one more person later died of his injuries, bringing the total to 14.

The discrepancy could not immediately be reconciled. It was unclear how many Iraqis were wounded in the attack. The assistant police chief of Kanaan, Capt. Waleed Mitieb al-Karkhi, said they included three children and two women.

In Baghdad, a car bombing killed four people and wounded another nine outside a store selling liquor in the center of the city, police said.

Despite the bombings, this season has been markedly calmer than the same time last year, when at least 80 Iraqis were killed on the first day of Eid al-Adha, one of the most important holidays of the Islamic calendar.

So far this month, 536 Iraqis have died in war-related violence

compared to 2,309 last December, according to an Associated Press count.

Violence across the country has fallen by about 60 percent in recent months. The drop has been attributed largely to a combination of this summer's increase in U.S. troops in Baghdad, a freeze on activities by the Mahdi Army militia and the appearance of "awakening councils" - Sunni Arab tribesmen who have turned against al Qaeda in Iraq.

In Washington, President Bush said more work remains to be done in Iraq, especially in terms of political improvements in the country.

"Are we satisfied with progress in Baghdad? No, but to say nothing is happening is not the case," Bush said.

Much of the day's violence was centered in Diyala province, where turbulence has been slower to subside than in other parts of Iraq. There are areas of Diyala that the U.S. military has never controlled.

The top U.S. commander in northern Iraq - whose area includes Diyala - has warned that al Qaeda in Iraq is still capable of staging spectacular attacks there despite a 50 percent drop in violence in his region.

Army Maj. Gen. Mark P. Hertling said Wednesday that al Qaeda in Iraq was being pushed north by the increased number of U.S. troops that surged into Baghdad over the summer and fall. The U.S.-backed "awakening councils" have also been flushing insurgents out of the neighboring Anbar province.

Many of the insurgents have passed through Diyala, Hertling said. "There are still some very bad things happening in that province, but we are continuing to pursue al Qaeda so they don't find a safe haven anywhere."

U.S. soldiers carrying out operations in Diyala also recently found mass graves with a total of 26 bodies next to what the U.S. military described as a torture center.

The grisly discoveries near Muqdadiyah, about 60 miles north of Baghdad, came during a Dec. 8-11 operation that also saw battles between American troops and militants. The military said it killed 24 insurgents and detained 37 others during the operation.

To the south in Basra, where the Iraqi government took over control of the province from British forces on Sunday, the city's police chief announced his department was firing 1,000 officers from a force known to have been infiltrated by Shiite militias. Maj. Gen. Jalil Khalaf also said more officers may be removed in the future.

Separately, the U.S. military said a preliminary investigation of a Dec. 17 incident in which a Marine killed an Iraqi policeman as they manned a joint security station north of Ramadi showed both men suffered cuts during a fight. It was not clear what sparked the fight. Hundreds of protesters marched through the dusty streets of Ramadi on Thursday to protest the police officer's death, AP Television News footage showed.

The military said the Marine, who was not identified, was treated at a hospital and released, and was not yet facing charges.