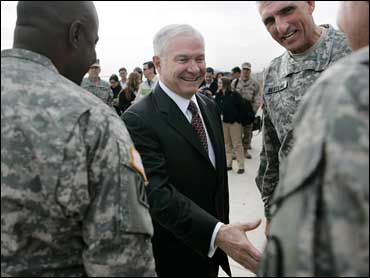 The top U.S. commander in northern Iraq warned Wednesday that al Qaeda in Iraq was still capable of staging spectacular attacks despite a 50 percent drop in bombings and other violence in his region.

Army Maj. Gen. Mark P. Hertling said al Qaeda in Iraq was being pushed north by the increased numbers of U.S. troops that surged into Baghdad over the summer and fall. The insurgents are also being flushed out of Anbar province by "awakening councils" - groups of Sunni Arab tribesmen the U.S. military has backed to help fight al Qaeda in Iraq and its allies.

"Many of them have transited our province" of Diyala, which has seen some of the worst violence in Iraq, he said. "There are still some very bad things happening in that province, but we are continuing to pursue al Qaeda so they don't find a safe haven anywhere."

He said al Qaeda extremists could still carry out attacks against infrastructure projects such as bridges.

"You know, there are going to be continued spectacular attacks," he said when asked about the bombing of a bridge across Mosul dam on Monday.

Built in the 1980s on the Tigris River near Mosul, the dam made headlines in June after a report by the U.S. Army Corps of Engineers said potential erosion of its foundation could cause it to buckle under the water pressure, flooding Mosul and parts of Baghdad, 225 miles to the south.

He said that during an ongoing operation against insurgents and al Qaeda in western Diyala province, military forces discovered weapons caches, a torture chamber with a bed that was wired to electrocute victims and knives and swords covered in blood.

Violence in Iraq has abated in recent months and the U.S. military has said it has dropped by as much as 60 to 70 percent in some places. In Baghdad, only one bullet-riddled body was found washed up along the Tigris River Wednesday, while another man was killed by a roadside bomb.

The lull may have been a result of the start of the Eid al-Adha holiday for Sunni Muslims in Iraq. Shiites - who also celebrate the day - are expected to mark Eid on Friday.

Eid al-Adha is a holy celebration for Muslims, commemorating the prophet Abraham's willingness to sacrifice his son for God. According to Muslim tradition, after Abraham expresses his willingness, God sends the prophet two sheep instead for slaughter.

Hertling said the four provinces under his command had seen a marked reduction of attacks by improvised explosive devices such as roadside bombs.

"We have seen a precipitous decline in IED operations," he said, adding that they had dropped by 50 percent from June, when there were 1,698 attacks, compared to 849 in November.

But such bombings still plague his region, and Hertling's troops have been working hard for five days to restore a major four-lane highway in western Mosul that has been closed because of IED attacks on civilian and military traffic.

In that time, three miles of the road, known as Highway One, were cleared and repaired, the military said.

"Infrastructure such as Highway One are what enable major cities such as Mosul to thrive. Al Qaeda has made every attempt to keep this unusable," said Maj. John Oliver Jr., operations officer for 3d Squadron, 3d Armored Cavalry Regiment.

Farther to the north, Kurdish authorities in northern Iraq said Wednesday that their forces would defend civilians if they were caught up in any fighting between Turkish troops and Turkish Kurd rebels from the outlawed PKK in the area.

On Tuesday, Turkey sent hundreds of troops across the border into the frigid mountains of northern Iraq, claiming it inflicted heavy losses on rebels in the small-scale incursion, which lasted about 15 hours, and from airstrikes two days earlier.