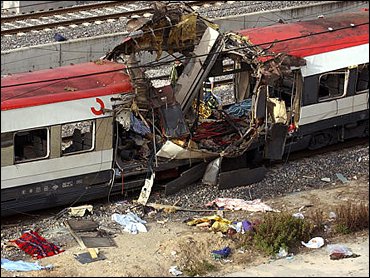 "This is a massacre," government spokesman Eduardo Zaplana said.

The idea that ETA might be involved is, however, being rejected by at least one Basque leader.

The Basque party leader denies that Thursday's deadly explosions in Madrid were the work of ETA and he suggested "Arab resistance" elements were responsible.

"The modus operandi, the high number of victims and the way it was carried out make me think, and I have a hypothesis in mind, that yes it may have been an operative cell from the Arab resistance," Otegi said.

This is the deadliest terrorist attack in Europe for decades, reports CBS News Chief European Correspondent Tom Fenton, and, if it does turn out to be ETA's work, a reminder that Islamic fundamentalism is not the only public threat to safety. Thursday's targets were not government or military officials but ordinary people.

At least two bombs exploded around 7:30 a.m. in a commuter train arriving at Atocha station, a bustling hub for subway, commuter and long-distance trains. Blasts rocked two other stops on a commuter line leading to Atocha.

Rescue workers carried away bodies covered in sheets of shiny gold fabric. People with bloodied faces sat on curbs, using cell phones to tell others they were alive. Hospitals appealed for people to come in and donate blood. Buses had to be pressed into service as ambulances.

People in tears streamed away from the Atocha station in droves.

"I saw many things explode in the air, I don't know, it was horrible," said Juani Fernandez, 50, a civil servant who was on the platform waiting to go to work.

"People started to scream and run, some bumping into each other and as we ran there was another explosion. I saw people with blood pouring from them, people on the ground."

There was no claim of responsibility, but officials immediately blamed ETA. The toll would make Thursday the deadliest ever in decades of attacks by ETA. Until now, the deadliest attack by ETA was a 1987 supermarket blast in Barcelona that killed 21 people. The attacks came three days before Spain's general elections in which the fight against Basque terrorism is a major issue, reports Fenton.

The bombs went off at the height of the morning rush hour.

"What a horror," said the Basque regional president, Juan Jose Ibarretxe, who insisted ETA does not represent the Basque people. "When ETA attacks, the Basque heart breaks into a thousand pieces," he said in the Basque capital Vitoria.

"This is one of those days that you don't want to live through," said opposition Socialist party spokesman Jesus Caldera. "ETA must be defeated," referring to the group as "those terrorists, those animals."

Police had been on high alert for Basque separatist violence ahead of general elections Sunday, in which regional tensions and how to fight ETA have been key themes. Mariano Rajoy, the candidate for prime minister of the ruling conservative Popular Party, said he was calling off the rest of his campaign.

A woman who lives near the El Pozo station on the line leading to Atocha said "the scene I am seeing is hellish. People running toward Atocha however they can."

The woman said she saw a boy or young man on the ground who appeared to have died. "I can see people inside the remains of the train," the unidentified woman told Spanish National Radio.