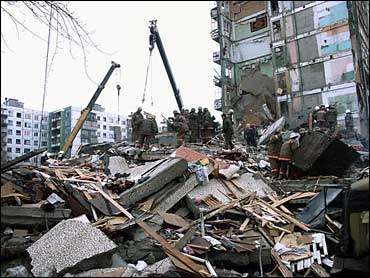 A natural-gas explosion sheared off a nine-story section of an apartment building early Tuesday, killing at least 29 people and leaving several others feared trapped in the rubble as police searched for two homeless men suspected of triggering the blast by stealing lids from gas pipes to sell for scrap.

Another 24 people were rescued from the building in this northern city, said Emergency Situations Ministry spokeswoman Irina Andriyanova. She said up to 63 people could have been inside the affected section at the moment of the explosion, meaning the number missing under the rubble as night fell could be as many as 12.

Igor Avtushko, spokesman for the regional Interior Ministry, said that authorities were searching for two men seen by residents of the neighborhood where the blast occurred. The men were allegedly carrying metal pipes and instruments. Police believed the men opened the gas valves in order to steal the bronze lids that seal them.

Avtushko said authorities found the lids missing in two neighboring buildings, but crews were able to fix the gas leaks in time.

Andrei Seleznyov, 52, a resident of a neighboring apartment building, said that the homeless men had been systematically stealing the lids in the past. "These damned vagabonds unscrewed these valves a hundred times in the past, but then it didn't lead to explosions," Seleznyov said.

Thieves pilfer power lines, municipal facilities and industrial equipment throughout Russia in search for copper, bronze and other metals to sell for scrap.

Earlier, authorities had feared that sabotage or terrorism was to blame, even though the first crews to respond to the blast reported a strong odor of gas and there were no reports that security agents had found explosives.

Tension is high in Russia after a series of terrorist attacks blamed on Chechen rebels. In fall 1999, explosions blamed on rebels ripped through apartment buildings in Moscow and two other cities, killing some 300 people.

Tuesday's blast hit at 3:25 a.m. when most residents of the building in Arkhangelsk, a White Sea port about 600 miles north of Moscow, would have been in bed.

"We were awakened by a terrible noise," Igor, 40, who lives in the adjoining section of the apartment building, told Arkhangelsk's Pravda Severa newspaper. "The wall of our bedroom came crashing down on the bed ... We were in a state of shock."

"Through a pillar of dust I saw the street, just our street instead of the wall," he said. He described hearing "heartbreaking cries."

Vadim and Anna Kurochkin were awake in their ninth-floor apartment when the blast occurred and they were thrown out on their sofa, landing safely with no injuries. Their nine-year old son, Artyom, was on the balcony, which miraculously didn't collapse in the explosion, and he was rescued by firefighters, Irina Budnik, a spokeswoman for the local fire brigade told Pravda Severa.

NTV television said that residents of the building had reported smelling gas to the local emergency gas service before the explosion, but that its workers didn't come until the blast occurred.

The explosion destroyed an entire section of the prefabricated building from top to bottom, leaving huge chunks of debris and blowing out windows in neighboring buildings.

Rescue crews clambered over the wreckage, using power saws to cut through piles of building materials as cranes lifted off the biggest beams and panels. Officials said they hoped to find more survivors, pointing that there is chance for them to survive when prefabricated buildings collapse because of spaces left between the fallen panels.

Arkhangelsk prosecutors opened a criminal investigation into the case on charges of death by negligence and causing damage through negligence. The General Prosecutor's Office said it wasn't excluding any possibility, but a gas explosion remains the main version.