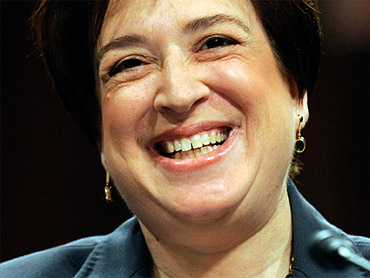 She cracked wise. She waxed sentimental. And she employed the artful dodge liberally.

Supreme Court nominee Elena Kagan let some of her personality show through Tuesday as members of the Senate Judiciary Committee poked into every corner of her legal thinking. And she offered what amounted to a personal declaration of independence when questioned repeatedly about her admiration for her former boss, the late Justice Thurgood Marshall.

Through it all, Kagan didn't let her guard down.

She skirted questions aplenty on Day 2 of her confirmation hearings, and held her tongue when Republicans gave it to her good.

She was far more animated and at ease than during her slow, careful delivery of her opening statement on Monday.

Kagan bobbed her head. She waved her arms. She was funny.

And it seemed as if she meant it.

When Sen. Dianne Feinstein, D-Calif., suggested "a little heart to heart" talk with the nominee, Kagan went along with the joke.

"Just you and me," she agreed, as the video rolled and the cameras clicked.

Grilled about her actions as Harvard Law dean to restrict military recruitment on campus, Kagan got emotional when one senator read aloud from an opinion piece by a Marine captain and Harvard Law graduate who wrote of her support for the military.

"I've only cried once during this process," Kagan said, "and I cried when I woke up one morning and I read that op-ed from Captain Merrill. It meant just an enormous amount to me. "

At one point, Hatch and Committee Chairman Patrick Leahy got into a little back-and-forth over the fairness of Hatch's questions, the kind of exchange that Hatch said helps to keep the Congress from being "boring as hell."

Kagan chimed in: "And it gets the spotlight off me, you know, so I'm all for it."

Kagan even poked fun at the justices whom she hopes to soon join. Speaking about her support for allowing cameras in the Supreme Court, Kagan called it an incredible sight to watch the justices during oral arguments, but also allowed that some cases "will put you to sleep, you know."

She cracked up senators and the audience alike when she was asked about her whereabouts on Christmas Day, when there was an attempted airplane bombing, telling the committee: "You know, like all Jews, I was probably in a Chinese restaurant."

Kagan's humor got a thumbs-up from Sen. Arlen Specter, D-Penn., one of her most cantankerous questioners.

Talking about television coverage of the courts, Kagan told Specter: "It means I'd have to get my hair done more often."

That left him momentarily speechless.

Then he offered: "Let me commend you on that last comment, and I say that seriously. You have have shown a really admirable sense of humor, and I think that is really important."

Sen. Chuck Schumer, D-N.Y., later predicted Kagan would give Justice Antonin Scalia, who gets the most laughs on the high court, a run for his money.

Kagan was relaxed, but it didn't keep her from backpedaling on her own words.

Kagan knew that questions about her 1995 article on Supreme Court confirmation hearings were coming, and she was ready.

In the article, Kagan had complained that Supreme Court hearings had "taken on an air of vacuity and farce" because senators didn't pin down nominees on their legal views. Senators, she said, should pursue more "substantive inquiry" and push nominees to be more open about views.

The article was inspired by Kagan's observations as a Judiciary Committee staffer during the confirmation hearings for Justice Ruth Bader Ginsburg.

On Tuesday, she allowed: "It just feels a lot different here from it did from back there," referring to the row of staffers seated behind the senators.

Kagan said she stood by the basic thrust of her article, but allowed that she had "skewed it a little too much" in favor of openness.

And then she began to dodge in earnest.

Sen. Herb Kohl, D-Wisc., asked Kagan what her "passions" would be as a judge.

"I think I will take this one case at a time," she demurred. "It would not be right for a judge to come in and say, 'I have a passion for this or that."

Kohl reminded Kagan that she'd written that "it was a fair question" to ask nominees what direction they would move the court.

And then he asked her just that.

But it wasn't one she was willing to answer.

In assessing Kagan's performance, CBS News legal correspondent Jan Crawford said she held her own, she was confident, showed flashes of it with, but didn't break a lot of new ground.