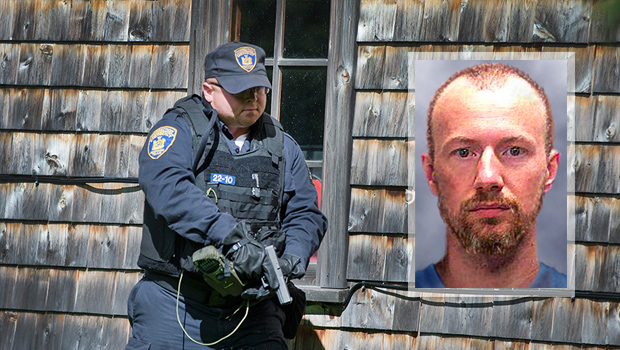 MALONE, N.Y. -- The second of two convicted murderers who staged a brazen escape three weeks ago from a maximum-security prison in northern New York was shot and captured near the Canadian border on Sunday, two days after his fellow inmate was killed in a confrontation with law enforcement, authorities said.

"The nightmare is finally over," Gov. Andrew Cuomo declared at a news conference.

Sweat, who was unarmed, was struck twice in the torso and was taken to a secure unit at the Albany Medical Center, where he was listed in critical condition, hospital officials said.

A state police sergeant shot David Sweat in the town of Constable, about 1½ miles south of the Canadian border and 30 miles northwest of the prison, after spotting him walking along a road and recognizing him, Cuomo said.

Sgt. Jay Cook was alone and on routine patrol when he stumbled upon Sweat. He gave chase when Sweat fled and decided to fire as the fugitive approached a tree line where Cook feared he would lose him, state police said.

"I can only assume he was going for the border," Superintendent Joseph D'Amico said.

He had not been formally interviewed by investigators as of late Sunday, but any information he provides could be critical to the investigation, Clinton County District Attorney Andrew Wylie said.

Sweat will be charged with escape, burglary and other charges, Wylie said. The inmates are suspected of breaking into some of the region's many cabins during their time on the lam. Wylie said prosecutors would wait for Sweat to recover before charging him.

His capture came two days after his escape partner, Richard Matt, was shot and killed by authorities. The men had been on the loose since June 6, when they cut their way out of a maximum-security prison about 30 miles away using power tools.

D'Amico said the men may have used black pepper to mask their trail; he said Sweat's DNA was recovered from pepper shakers found at one camp where the fugitives may have spent time.

"We did have difficulty tracking so, you know, it was fairly effective in that respect," D'Amico said.

Cuomo said many questions remained unanswered in the case which, had it been a movie plot, would have been called "overdone."

"We have already started a full investigation," he said. "But today ends with good news. These were dangerous, dangerous men."

Matt and Sweat used power tools to saw through a steel cell wall and several steel steam pipes, bashed a hole through a 2-foot-thick brick wall, squirmed through pipes and emerged from a manhole outside the Clinton Correctional Facility in Dannemora.

Sweat was serving a sentence of life without parole in the killing of a sheriff's deputy in Broome County in 2002. Matt was serving 25 years to life for the killing and dismembering of his former boss. They were added to the U.S. Marshals Service's 15 Most Wanted fugitives list two weeks after getting away.

The search for the escaped killers was initially concentrated around the prison and a rural community where search dogs had caught the scent of both men. The search had since been expanded to neighboring counties, and, while authorities said there was no evidence the men had gotten out of the general area, they conceded they could have been almost anywhere.

"It's a little unnerving, him being so close," Constable resident Trevor Buchanan said Sunday. "I'm just glad it's over."

In nearby Malone, Cathy Leffler cheered outside Alice Hyde Medical Center, where Sweat was taken by ambulance. Jeffrey Gordon, a spokesman for Albany Medical Center, said Sweat was being transferred there for further treatment.

"I feel like I can sleep tonight," Leffler said. "Life can go back to normal. It's over now."

She said she had to come to the hospital to "see it through."

"This has been going on for three weeks and our town was in an uproar and we haven't been able to sleep. This is a relief for the town of Malone."

The manhunt broke open Friday afternoon when a person towing a camper heard a loud noise and thought a tire had blown. Finding there was no flat, the driver drove eight miles before looking again and finding a bullet hole in the trailer. A tactical team responding to the scene of the shot smelled gunpowder inside a cabin and saw evidence that someone had fled out the back door.

A noise - perhaps a cough - ultimately did Matt in. A border patrol team discovered Matt, who was shot after failing to heed a command to raise his hands.

Officials on Sunday released details of Matt's coroner's report, according to CBS News affiliate WCAX. They said the escaped inmate was killed after being shot three times in the head by a member of a U.S. Customs and Border Protection Tactical Unit.

Matt's body also revealed "bug bites on the lower extremities, blisters, and minor abrasions consistent with living in the woods for three weeks." A toxicology report is pending, but CBS News reported that Matt was likely drunk and suffering from some illness at the time of his death.

A coroner who attended the autopsy said Matt was clean, well-fed and dressed for the elements at the time he was killed.

A pair of prison workers has been charged in connection with the inmates' escape.

Prosecutors said Joyce Mitchell, a prison tailoring shop instructor who got close to the men while working with them, had agreed to be their getaway driver but backed out because she felt guilty for participating. Authorities also said Mitchell had discussed killing her husband, Lyle Mitchell, as part of the plot.

Authorities said the men had filled their beds in their adjacent cells with clothes to make it appear they were sleeping when guards made overnight rounds. On a cut steam pipe, the prisoners left a taunting note containing a crude caricature of an Asian face and the words "Have a nice day."

Prosecutors said the inmates apparently used tools stored by prison contractors, taking care to return them to their toolboxes after each night's work.

On June 24, authorities charged Clinton correction officer Gene Palmer with promoting prison contraband, tampering with physical evidence and official misconduct. Officials said he gave the two prisoners the frozen hamburger meat Joyce Mitchell had used to hide the tools she smuggled to Sweat and Matt. Palmer's attorney said he had no knowledge that the meat contained hacksaw blades, a bit and a screwdriver. Palmer is due in court Monday.