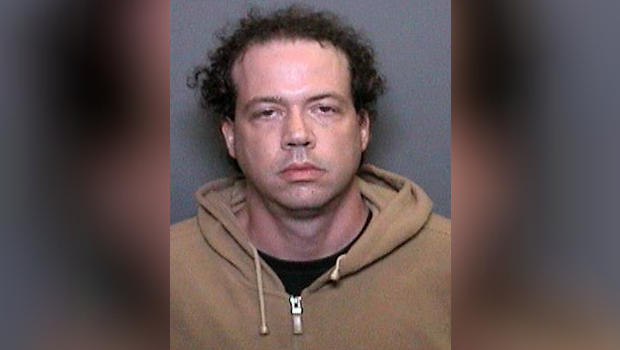 SANTA ANA, Calif. -- A man who posted videos of himself holding guns and smiling while describing his desire to go on a killing rampage has been arrested after threatening a staff member at a private university in Southern California that he attended, authorities said Monday.

David Kenneth Smith, 40, was accused of making criminal threats after authorities received a report about an email exchange Smith had with a staff member at Soka University in Aliso Viejo last week.

Investigators say the emails discussed disciplinary action taken against Smith for marijuana use when he attended the university in 2008, CBS Los Angeles reports.

CBS Los Angeles reports that the tone of the email correspondence escalated to the point where Smith emailed the staff member a link to a YouTube video that showed him sitting with a semi-automatic pistol on his chest talking about the university, according to authorities.

In the video, Smith said college employees "never liked me" and described being repeatedly fined for residence hall violations and accused of stealing another student's belongings. He said he filed complaints with the school against several employees, including a dean.

Investigators said Smith had posted other videos of himself holding weapons and speaking of his desire to kill. Smith was arrested Friday, and authorities recovered nine loaded weapons registered to him.

"There were multiple videos of him talking about killing sprees, and in several videos, he's carrying a firearm," Jaimee Blashaw, a spokeswoman for the Orange County Sheriff's Department, said. "The threat was credible enough."

In another video on his YouTube page, posted last week and titled, "What Good Does Killing Ever Do?" Smith talked about how a "killing spree" would be better than taking his own life, as he said his father had done.

A separate video shows Smith with a shotgun slung over his shoulder as talks about possibly going to a college campus and shooting students or shooting at police officers.

"If you're going to go on a killing spree, you might as well do it equally. I've given it a lot of thought about this," he says into the camera. "Who do you kill? I've come to the conclusion you just shoot everyone."

CBS Los Angeles reports that Smith was taken into custody within 48 hours, at which point he was found with nine firearms – all registered to Smith – which were loaded when they were confiscated, according to prosecutors.

"Extensive resources were dedicated to the case to ensure the suspect did not have the opportunity to carry out his stated plans," the sheriff's statement said. "Investigators believed the suspect's threats were credible and an attack possible."

The district attorney's office charged Smith with one felony count of criminal threats. He was being held on $1 million bail and waiting to be arraigned Monday.

It was not immediately clear whether Smith had an attorney.

Smith has no criminal history in Orange County, Blashaw said. She said it was not clear why Smith reached out to the school, but when the exchanges escalated, the university was right to report it.

Smith graduated from Soka University with a liberal-arts degree in 2008, said Wendy Harder, a school spokeswoman. The school has 450 students and was founded by a Japanese Buddhist philosopher and educator, she said.