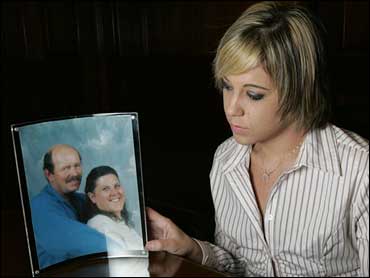 When Eva Rowe was just 20 years old, she lost both her parents in a heartbeat. They were among the victims of a horrifying explosion at a BP oil refinery in Texas two years ago.

James and Linda Rowe were among the 15 killed in one of the nation's worst industrial accidents in recent memory.

"It got real tough, like I almost wanted to give up and go away because it was like I had the weight of the world on my shoulders," Rowe told The Early Show co-anchor Harry Smith.

The blast injured 170 others, including Tyrone Smith. He barely survived, with burns over 87 percent of his body.

"I closed my eyes, and I asked God not to let me die," Smith said.

Nearly two years after the explosion many families are still finding it hard to cope like the father and step-mother of Ryan Rodriguez.

"I've been consumed with a lot of grief since it's happened," Roger Rodriguez said.

Although several lawsuits were filed on behalf of the victims, BP quietly settled most of them out of court. But Rowe decided to fight.

"I felt like I was doing it for my parents, and if I gave up, then I was, you know, giving up on them. I couldn't give up," she said.

In October, Rowe spoke to the late 60 Minutes correspondent Ed Bradley. She told him that BP attempted to settle, but she refused because she wanted the truth to come out in the trial.

"If we settle and all, everything we know has to remain confidential," she told Bradley. "I don't want that to happen."

But just before the trial was to start, Rowe and BP did settle, but the terms were extraordinary. BP would have to make reports about the accident available to the public. And they agreed to Rowe's demands to donate $32 million for several funds that Rowe would administer to better the lives of oil workers.

"So I became determined — determined to make a difference," Rowe said.

Her first step was a $12.5 million donation to the Blocker Burn Unit in Galveston, where Smith and nearly two dozen other BP victims were treated.

"It showed me that someone cared, you know?" Smith said. "She's showing that she cared. Just letting BP know personally that it's not about the money, it's about, you know, this burn unit, making it a better place."

"Grants like this are very, very, very, very rare," said Dr. David Herndon, director of the Blocker Burn Unit. "She didn't take the money for herself quietly. She gave back to the community."

Rowe touched a nerve with other grieving families, who said she echoed their own feelings of anger.

"If this foundation saves one person, then it's worth all the effort," Roger Rodriguez said.

All this came about just before the holidays. Dorothy Rodriguez said that she felt it was almost like a rebirth, just in time for Christmas.

"I just don't know if you planned it that way or what," she said. "But you know what? Thank you. Thank you for giving us some hope!"

Even though people are calling Rowe a hero, she said she feels like she merely did what she had to do. After all, her mother always told her to do what is right, she said.

For more information about the settlement, visit:

Documents related to the explosion, released as part of the settlement between Eva Rowe and BP

Houston Chronicle on the settlement between Eva Rowe and BP

News release from the University of Texas Medical Branch in Galveston, where the burn unit is located