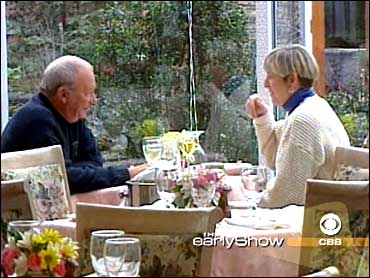 The dating circuit has gone through radical changes in the past few decades. From on-line personals to speed dating, single people face an ever-shifting landscape. But if there's one thing that hasn't changed, it's the universal dating question: Who should pick up the check?

Susan McGinnis went out to explore whether the rules have changed. She reported on The Early Show that while the dynamics of dating have evolved, the question of is less about independence and more about instinct.

McGinnis found that opinions vary among daters over who should pay, but says that a little scientific research shows it could come down to simple animal instincts, the birds and the bees.

Anthropologist Helen Fisher says it's natural for a man to want to pay the check and that something comparable happens all the time in the animal world.

"Chimpanzees will catch a little rabbit or hand over sugar cane. The bird catches a fish and hands it to the female," Fisher says. "The exchange of food for sex. It's called courtship feeding. You see it in insects. In fact, it's so common in insects that they call it the nuptial gift."

Is that behavior really so different from what's seen in the human world? "In the United States, they give candy, beer, fancy food and dinner," Fisher said.

A survey by Match.com finds that 71 percent of men think they should pick up the tab on a date while 58 percent of women agree.

Charley Wininger, a dating coach, says it sends a very specific message: "It demonstrates generosity, the ability to pay and it sends a message that says, 'Hey, I'm not here just to explore the possibility of friendship.' "

McGinnis reports that dating experts agree it is perfectly acceptable for a woman to pick up a check without upsetting the "natural" balance. But while that might be a new development, it seems that the basic rules really haven't changed much.

"Deep in the heart of just about every woman I've ever known, she knows that when a man offers to pay for dinner, that he has begun the courting process," says Fisher.