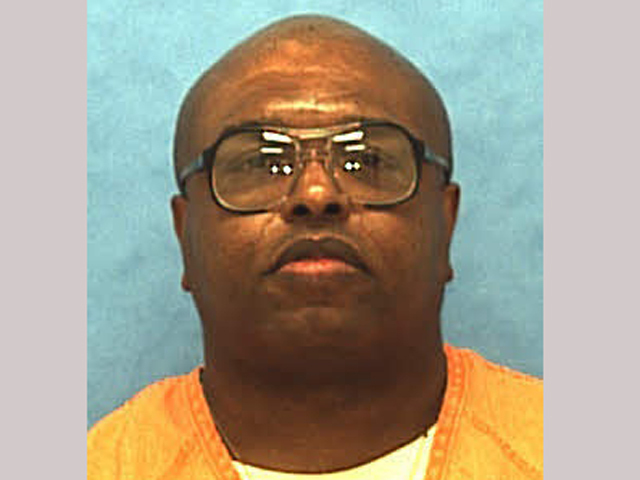 (CBS/AP) ORLANDO, Fla. - A 40-year-old man convicted of raping and murdering an aspiring artist at her Orlando apartment 22 years ago, is scheduled to be executed Tuesday at a Florida state prison in Starke, reports CBS affiliate WKMG.

Darious Kimbrough was convicted of the murder of 28-year-old Denise Collins after an eyewitness account placed him at the woman's apartment complex at the time of the crime.

In October 1991, Collins was found nude, moaning, covered in blood and barely conscious in her apartment's bathroom. The sliding glass door to the second-floor balcony was partially open, and there were ladder impressions in the ground underneath the balcony.

The woman was rushed to a hospital where she died the next day. Detectives found semen on her sheets and pubic hairs in her bed and in a towel.

A neighbor in Collins' Orlando complex told detectives he had seen a man near Collins' apartment near a ladder by the apartment's balcony, and the neighbor later identified then-19-year-old Kimbrough as the man, in a picture lineup. A maintenance man at the complex also said Kimbrough had watched him putting away a ladder in the complex around the time of the murder. Kimbrough was charged with the first-degree murder, sexual assault and burglary almost a year later. He was found guilty at his 1994 trial, during which experts testified that blood and semen samples taken from Collins' bed were compatible with Kimbrough's DNA.

More than two decades after Collins' death, Kimbrough is about to be executed.

Stewart, who lives in New Jersey, said she planned to attend the execution with Collins' sister.

Kimbrough's attorneys are appealing the active death warrant. In previous appeals, his defense attorneys have said the evidence was circumstantial and that the neighbor who placed Kimbrough by Collins' apartment balcony was elderly and had memory lapses.

Kimbrough says he had ineffective legal representation at his trial and that his attorney didn't hire a mental health professional to evaluate him.

Kimbrough's attorneys had blamed Collins' former boyfriend for the crimes. He had beaten her previously, they said, and he had a key to her apartment. That evidence was excluded from his trial, and Kimbrough's attorneys argued it should have been allowed to be introduced to jurors.

Defense attorneys also said a juror didn't reveal that his fiancee was employed at the Florida Department of Law Enforcement, whose crime lab analyst testified at the trial, and that the DNA testing used to convict Kimbrough was faulty.

"The defendant was denied his right to a fair and impartial jury by prejudicial pretrial publicity, by lack of a change of venue, by failure to sequester the jury and by events in the courtroom during trial," Kimbrough's post-conviction attorney Robert Strain said in a recent filing. Strain didn't return a phone call from the Associated Press.

A month after Kimbrough was convicted of first-degree murder, but before he was sentenced, court officials learned that three jurors had read a newspaper article about the victim. Kimbrough's attorneys asked for a mistrial for the penalty phase and a separate jury was picked to decide a sentence. Jurors recommended death by a vote of 11-1.

Collins was an aspiring artist at the time of her death. She went to high school in Titusville and attended colleges in Boston. She got a job at Kinko's in Orlando after earning a fine arts degree, but she wanted to be a graphic artist. She loved cats and was "big-hearted," said her mother.

"She had a very pleasing personality. She was outgoing and laid-back," Stewart said. "She was very pretty, a very attractive girl."

Collins spent her last evening listening to CDs at a friend's apartment along with other friends, including Boodhoo. She returned to her apartment at night, and detectives believe she was attacked sometime between midnight and 4 a.m. the next day.

Medical examiner testified at trial that Collins had a fractured jaw. The cause of death was ruled hemorrhaging and brain injury from blunt injury to the face. There were tears and swelling around her vagina, according to the medical examiner's report.

Boodhoo recalled Collins as a loving person who did work in painting, drawing and collages.

"There was such a beauty to her work, her personality, her relationship with others," Boodhoo said. "I'm just glad he's going to die ... I couldn't be happier about it. He's the worst kind of human being there is."