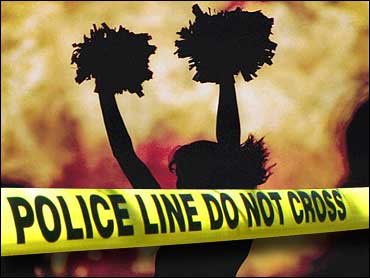 One person required stitches and a mother and son were arrested after a brawl between two dance teams that began during an impromptu "dance off," police said.

The Dynamic Steppers were practicing routines Saturday night when members of another dance "drill" team, the White Tigers, showed up and challenged them to a "dance-off," police said.

Drill teams are comprised of dancers and drummers. The dancing involves complex choreography and combines elements of military drills with contemporary jazz and hip-hop moves, along with singing and chanting to percussion. Teams often meet in competitions held throughout the U.S.

When the White Tigers team appeared to be losing on Saturday, a woman hit a 17-year-old Dynamic Steppers drummer in the face with a drumstick, Easter said.

The teen, a former member of the White Tigers, punched the 28-year-old woman in the face. He then got into his car and tried to run over spectators, witnesses told police.

The boy's mother, a Dynamic Steppers coach, grabbed a box cutter and sliced the other woman's arm. The wound required eight stitches.

The mother was charged Monday with aggravated battery, and the son faced assault charges.

An estimated 50 people were involved in the brawl, and police said more charges are possible.