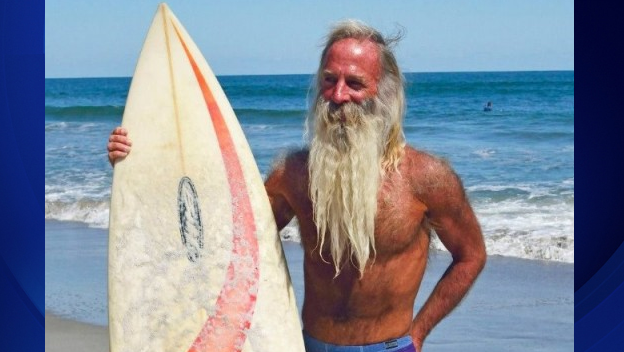 HUNTINGTON BEACH, Calif. -- A Florida surfer who dreamed of riding Southern California waves has died doing what he loved.

Dana Brown, 60, was paddling near the Huntington Beach pier near sunset on Nov. 6 when he was slammed into a pier pillar.

He was underwater for several minutes before other surfers saw him and towed him to shore, according to a GoFundMe page set up to help pay for his funeral expenses.

He died at a hospital four days later.

Brown lived in a van with his father, George.

Racheal Katz met them about four years ago in Cocoa Beach, Florida. “Dana and his dad were innocent,” she told the Los Angeles Times. “You don’t see innocent people any more, and you definitely don’t find innocent 60-year-olds.”

Brown, who wore a long white beard, was deeply religious and wouldn’t surf on the Sabbath, she said.

He took care of his ailing father, bathing, feeding and reading to him.

“When his dad got sick, he spent probably every day with him,” Katz said. “Dana carried him in and out of that van every day. He didn’t want him in any kind of an adult caring facility.”

His father’s death in March dealt Brown emotional and financial blows, and he spent many weekends at his father’s gravesite, according to the GoFundMe page.

“They had a journey together, him and his dad,” Katz said. “The death kind of ruined what Dana believed.”

About six months later, Brown left Cocoa Beach on his dream trip to Huntington Beach. The Orange County city is known for its excellent surfing and has trademarked the title “Surf City USA.”

Brown was expected to be buried next to his father in Cocoa Beach on Dec. 3.

“I hope he caught one great wave,” Katz said. “He died doing what he loved.”