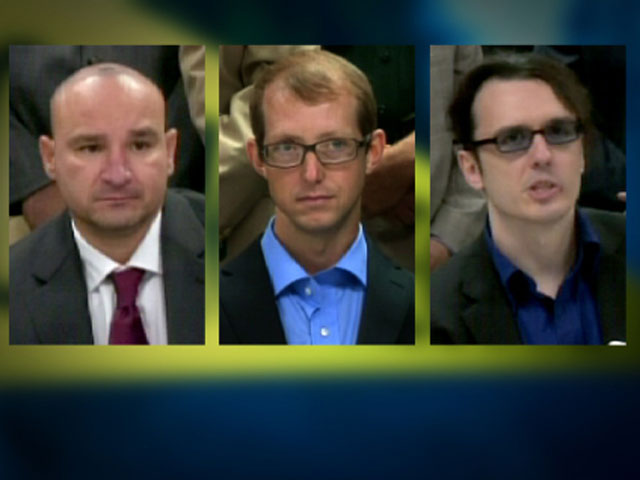 (CBS) - The West Memphis Three, a group of men who were convicted in 1994 for killing three 8-year-old Cub Scouts in Arkansas, spent 18 years behind bars for a crime they say they did not commit. The men, who were allowed to walk free last month, spoke to CNN's Piers Morgan in an interview that aired Thursday describing their years behind bars.

"I hadn't seen daylight in almost a decade. I hadn't been exposed to sunlight...for almost 10 years," Damien Echols described to Morgan on CNN. Echols lived in isolation on death row in a concrete cell, where his food was passed to him through a slot.

Echols said the only way he maintained his sanity was to not think about the case.

"You have to create your own world in there or you'll go insane from that stuff."

He told Morgan that he still squints in bright light as a result of living with very little light for so long.

"It was like having a spotlight turned right in your face. It was extremely bright," he described of seeing daylight for the first time after being in prison.

Jason Baldwin, another of the West Memphis Three, said he spent the first few years of prison being beat up by inmates who thought he was a child killer, but after word spread about their innocence he says the punches turned into hugs, reports CNN.

Echols, Baldwin and Jesse Misskelley, who was not present for the interview, were convicted of killing the three boys, Steve Branch, Christopher Byers and Michael Moore, and leaving their naked bodies in a ditch in West Memphis, Ark. in 1994. Echols was sentenced to death while Misskelley and Baldwin were ordered to spend the rest of their lives in prison.

Police had few leads until receiving a tip that Echols had been seen mud-covered the night the boys disappeared. The big break came when Misskelley unexpectedly confessed and implicated Baldwin and Echols in the killings. Defense attorneys claim police took advantage of his low IQ.

Last month, the three agreed to a legal maneuver that lets them maintain their innocence while acknowledging prosecutors likely have enough evidence to convict them. Defense attorneys, along with celebrities and legal experts, have long said the men were wrongly convicted. Their attorneys pointed to new DNA evidence that showed no links.

Echols and Baldwin said in the interview that at the time, they were targeted for being different from the rest of their peers in the small town where they lived.