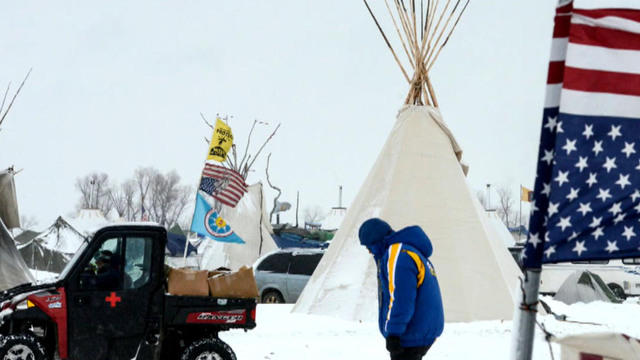 What the President Did Last Week

On January 24, President Trump signed a Presidential Memorandum expediting review of the application to build the Dakota Access Pipeline.  Construction of the 1,172 mile, $3.7 billion pipeline that carries oil from North Dakota into Illinois is almost complete, except for a 1,100 foot section under North Dakota’s Lake Oahe, an important reservoir on the Missouri River.  (President Obama had called for an environmental impact study which could take two years).

Kelcy Warren, the CEO of Energy Transfer Partners, which is the lead company building the pipeline, made a $100,000 contribution to the Trump Victory Fund in June of 2016.  Mr. Trump in 2015 also had an investment with the company of between $500,000 and $1 million. (A Trump spokesperson stated in November that he had sold his shares.  No evidence has been provided to support that claim.)

On the same day as the Dakota Access Pipeline action, Mr. Trump signed another memorandum inviting TransCanada, the developer of the Keystone XL Pipeline, to re-submit its application to the Department of State for a Presidential permit for the construction and operation of the pipeline.  This $8 billion project was designed to bring 830,000 barrels of crude oil per day from Alberta, Canada to Steele City, Nebraska, where existing lines would then take the oil to Gulf Coast refineries.  After spending several years in bureaucratic limbo, Keystone XL was stopped in 2015 by President Obama, who argued that “shipping dirtier crude oil into our country w[ill] not increase America’s energy security’’.

Mr. Trump directed the State Department to make a decision within 60 days of receiving TransCanada’s application.  The Hill notes, “under a 1994 executive order, the State Department is charged with determining whether the project is in the US’s ‘national interest’ (since the pipeline will cross the US-Canadian border), but it is the president who “makes the final decision on the permit.”  By January 26, TransCanada had resubmitted its application.

Why it Matters to Real People:

The Dakota Access Pipeline’s developer, Energy Transfer Partners, says the pipeline will create up to 12,000 jobs during its construction.  A State Department report issued during the Obama administration found that the project would create 1,950-3,900 direct construction jobs depending on whether the work was spread over one year or two.  Energy Transfer Partners has stated that 40 to 50 of the jobs created would be permanent.

TransCanada claims the Keystone XL project will produce 13,000 construction jobs. The State Department projects 35 of those jobs will be permanent.

The Keystone pipeline’s supporters, like Rep. Fred Upton (R-MI), say it would bring down energy prices, including gas prices.  But as CBS reported in 2014, “some critics contend that the pipeline could cause gas prices to rise, especially in the Midwest.”  This is because currently, without the pipeline, much of the oil being produced in Canada cannot be easily conducted to Gulf Coast refineries, and therefore has difficulty reaching foreign markets.  Because it cannot be sold abroad, refineries in the Midwest, facing little market competition, are able to access it at lower prices.  These low prices are passed on to consumers at the pump.  “Giving the Canadian oil access to the Gulf” by pushing forward with Keystone, however, CNN Money notes, “means the glut in the Midwest goes away, making it more expensive for the region.”

Consumer Watchdog has predicted that the Midwest could see “increases at the pump… rang[ing] from 25 cents to 40 cents a gallon, depending on how regional refineries respond to paying $20 to $30 more per 42-gallon barrel for Canadian crude oil.”  As the Washington Post puts it, “[t]he most direct beneficiaries of Keystone XL won’t be consumers.”

What the Administration Says:

The Trump administration maintains that pipeline construction will represent a boon to workers.  On January 24 in the Oval Office, Mr. Trump signed the memorandum on the Keystone XL Pipeline, announcing to rolling cameras as he did so, “A lot of jobs, 28,000 jobs…  Great construction jobs.”  It was a figure more than twice exceeding the estimates of developer TransCanada itself.  The President also boasts that he intends to force both companies (along with all companies working on U.S. pipelines going forward) to use American-manufactured, American-sourced steel “to the maximum extent possible and to the extent permitted by law”, creating jobs and profits for the American steel industry.

Both pipelines’ supporters have also said the project would enhance America’s energy security by reducing our dependence on Middle Eastern oil.  (In the case of Keystone, though, such an effect would be limited by the pipeline’s facilitating the export of finished petroleum products from coastal refineries chiefly overseas, instead of to primarily U.S. markets).

The Dakota Access Pipeline’s developer, Energy Transfer Partners, argues that pipelines are safer than shipping oil by trucks or rail and that their construction process includes several safety systems to protect against a spill. They also argue that the pipeline will not pass through Standing Rock Sioux reservation land.

Those who oppose the pipeline, such as environmentalist and 350.org founder, Bill McKibben, say whatever the job gains, they are not worth the environmental impact.  In the case of the Dakota Access Pipeline, the Standing Rock Sioux maintain that, in addition to traversing sacred burial ground, if the pipeline were to leak or rupture it would contaminate the Missouri River, the tribe’s water source.  Oil contamination of drinking water has been linked to elevated cancer risk.  The Chicago Tribune (analyzing AP data) notes that since 1995, there have been “more than 2,000 significant accidents involving oil and petroleum pipelines, adding up to roughly $3 billion in property damage” with at least 121 accidents occurring in 2013 and 2014 each.

Environmentalists opposing Keystone share spill concerns, but base their concerns largely on the Canadian oil sand production that pipeline expansion would facilitate.  As CNN Money notes, due to the energy-intensive method of extraction that must be used, “oil from the oil sands emit 17% more carbon dioxide than the average barrel of crude refined in the United States.”  Over the course of 50 years, the piece continues (citing data from the Natural Resources Defense Council), the extra greenhouse gas emissions from oil conducted via Keystone alone “would be almost as much as all the emissions saved from the new fuel efficiency standards on heavy trucks, and roughly double the amount saved from the effort by several northeast states to voluntarily restricting greenhouse gases.”

Some question whether White House efforts to mandate pipeline construction with U.S steel are feasible.  Dan Ikenson of the Cato Institute says that there is no precedent and “no legal authority” for a president to require private companies to use American-made materials or equipment outside of war-time.  Others suggest the question is moot, since TransCanada’s President for Keystone Projects, Corey Goulet, has stated publicly that most of the pipe for the Keystone project has already been purchased.  (The Hill notes of this already-purchased pipe, “only half of it is domestically produced.”)

Why it Matters in the Power Struggle in Washington:

The pipelines’ approval demonstrates how much influence environmental groups lost during the transition from former President Obama to Mr. Trump. But there are some elements of the American left, notably labor unions, that have been pushing for these pipelines, among other infrastructure projects. The president’s decision to greenlight the pipelines – and the thanks he received from unions – suggests organized labor may have some real clout within the new administration.

What to Watch for Next:

In the case of Keystone XL, the secretary of state has 60 days in which to consider the application of TransCanada, after which it is the president who will make the final executive branch determination. TransCanada still has work of its own to complete before it can build Keystone, including, for example, securing the right of way for its route in Nebraska from that state’s Public Service Commission – a process which is not expected to begin until September at the soonest, and which must be completed before the project can move forward with eminent domain.

The Standing Rock Sioux tribe and their supporters are concerned that the pipeline would be built on land promised to the Sioux in the 1851 Treaty of Fort Laramie, that it would contaminate the water supply, and that it would desecrate sacred burial grounds. They are now preparing to resist as they successfully did through demonstrations in 2016.

At one point, Reuters reports, almost 10,000 people had journeyed to join the demonstrations, including 4,000 veterans. Clashes with police have sometimes turned violent and more than 600 persons, including journalists, were charged or arrested.  As of January 26th, under 300 protesters remained, most having been urged by organizers to leave due to the winter weather.