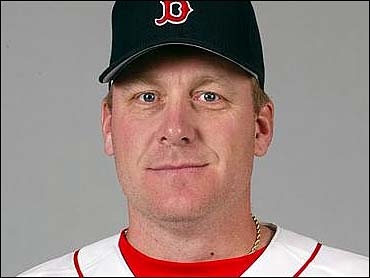 (AP)
Former Boston Red Sox pitcher Curt Schilling, an outspoken Republican who campaigned in New Hampshire for George Bush and John McCain in the past two presidential election cycles, told New England Cable News that he has "been contacted" about a possible run for the Senate seat formerly held by Ted Kennedy.

Asked if he would run, the right-hander said he has "a lot on my plate" at the moment and is thus "not even going to speculate on it."

Schilling told NECN that "the right [Republican] candidate" could beat a Democrat in Massachusetts for the seat "for the first time in a long time."

Schilling has not been quiet about his views on politics and other matters, sometimes calling into Boston talk radio shows to discuss his opinions.

"With the Massachusetts Republicans' extremely thin bench, it should be no surprise that Schilling has been contacted about running," said CBS News political director Steve Chaggaris.

An October 2004 Boston Globe article noted that while Schilling owned a house in Medfield, Mass., he hadn't registered to vote there. Schilling had registered by 2007 when he was being talked about as a potential candidate to run for Senate against John Kerry in 2008.

Massachusetts Gov. Deval Patrick has announced that a special election to fill Kennedy's seat will be held in January.