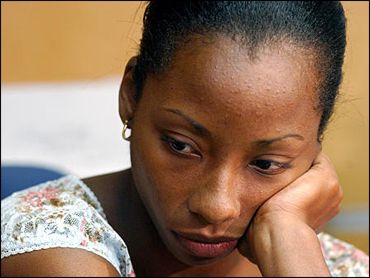 A third Cuban athlete has defected at the World Gymnastics Championships, joining two male teammates who left the Cuban delegation earlier this month.

"She is seeking asylum because she is a dissident in her own country," Carrillo said.

The three are seeking asylum and plan to present themselves to U.S. immigration authorities later this week, Carrillo said.

At a news conference Sunday night, the three gymnasts said they individually decided to defect from Cuba. The athletes stressed that there was no advanced planning on the island and they received no help from any U.S.-based groups or other teammates and coaches.

They also said they were worried about their families being persecuted in Cuba because of their defections.

"We're here because we feel free. We're running away from the political oppression," Tamayo, 22, said at the news conference held at Carrillo's law office in Montebello.

Spokesman Dan Kane of the Dept. of Homeland Security, which oversees immigration, declined to comment on their cases.

Kane said Cubans who enter the United States planning to defect usually face fewer obstacles than other immigrants because of the Cuban Adjustment Act of 1965, signed by President Johnson at the height of the Cold War.

The law made it easier for Cubans to defect to the United States, a process Kane said described as "pro forma" in most cases.

Most Cubans hoping to defect are detained briefly by federal authorities and then released with work permits. A year and one day after their release, they become eligible to apply for permanent resident status.

Carrillo asked the public for financial assistance for the athletes until they find work. He earlier said they have a strong case to win asylum.

"I think their chances of staying here are good because the U.S. is critical of Cuba's human rights record," Carrillo said. "It would be the height of hypocrisy if they don't grant these three dissidents asylum."

Cuba's team didn't compete in the women's team competition because it only sent two gymnasts. De La Pena, who declined comment, competed in only three events in the preliminaries, failing to qualify for the all-around or any event finals.

She was ranked 25th in the all-around the 2001 World Championships.