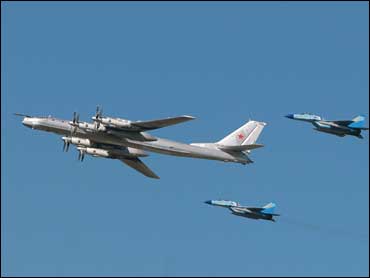 A Russian Air Force chief said Saturday that Venezuelan President Hugo Chavez has offered an island as a temporary base for strategic Russian bombers, the Interfax news agency reported.

The chief of staff of Russia's long range aviation, Maj. Gen. Anatoly Zhikharev, also said Cuba could be used to base the aircraft, Interfax reported.

The Kremlin, however, said the situation was hypothetical.

"The military is speaking about technical possibilities, that's all," Alexei Pavlov, a Kremlin official, told the Associated Press. "If there will be a development of the situation, then we can comment," he said.

Zhikharev said Chavez had offered "a whole island with an airdrome, which we can use as a temporary base for strategic bombers," the agency reported. "If there is a corresponding political decision, then the use of the island ... by the Russian Air Force is possible."

Interfax reported he said earlier that Cuba has air bases with four or five runways long enough for the huge bombers and could be used to host the long-range planes.

Two Russian bombers landed in Venezuela last year in what experts said was the first Western Hemisphere touchdown of Russian military craft since the end of the Cold War.

Cuba has never permanently hosted Russian or Soviet strategic aircraft. But Soviet short-range bombers often made stopovers there during the Cold War.

Russia resumed long-range bomber patrols in 2007 after a 15-year hiatus.

Independent military analyst Alexander Golts said from a strategic point of view there was nothing for Russia to gain from basing long-range craft within relatively short range of U.S. shores.

"It has no military sense. The bombers don't need any base. This is just a retaliatory gesture," Golts said, saying Russia wanted to hit back after U.S. ships patrolled Black Sea waters.
By Associated Press Writer David Nowak