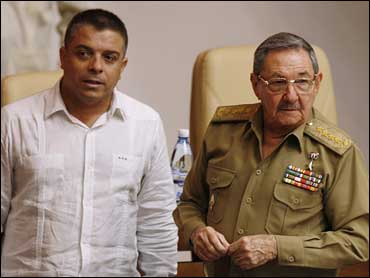 President Raul Castro abruptly removed some of Cuba's most powerful officials Monday, putting a personal stamp on the government in the biggest shakeup since he took over from his ailing brother Fidel Castro a year ago.

The changes replaced some key Fidel loyalists, including the longtime foreign minister and the secretary of the Council of State, with men closer to Raul. They also reduced the enormous powers of a vice president credited with saving Cuba's economy after the fall of the Soviet Union.

But analysts saw no immediate indication that the changes are related to hopes for closer U.S.-Cuban ties now that both countries have new presidents.

The abrupt shakeup, which also consolidated some of Cuba's many ministries to create a "more compact and functional structure," was the first major reorganization under Raul Castro. It was announced at the end of the midday news, after the weather and sports.

The most prominent of those ousted, Foreign Minister Felipe Perez Roque, was the youngest of Cuba's top leaders and had been widely mentioned as a possible future president. Perez Roque, 43, had been Fidel Castro's personal secretary before becoming foreign minister almost a decade ago.

"He was someone who was very close to Fidel Castro and built his career working directly for Fidel Castro," said Phil Peters, a Cuba specialist at the Lexington Institute near Washington.

Perez Roque was replaced by his own deputy, Bruno Rodriguez, who once served as Cuba's ambassador to the United Nations.

Peters said it was too early to say whether the changes could affect relations with the new administration of President Barack Obama, whose proposals for easing U.S. restrictions on Cuba have created hopes for the resumption of negotiations between the two countries on ending decades of hostilities.

"There is nothing that indicates it's a reaction to anything in the United States," Peters said, noting that Raul Castro has long spoken of streamlining Cuba's government.

Vice President Carlos Lage, 57, apparently kept his job as vice president of the ruling Council of State, but was replaced as Cabinet Secretary by Gen. Jose Amado Ricardo Guerra, who had been a top official in the military that Raul Castro ran for decades.

Lage was credited with helping save Cuba's economy by designing modest economic reforms after the Soviet Union collapsed. Peters said there was no sign Lage's economic role was being reduced.

Today's announcement is more wide ranging than expected and is bound to cause some unease until the population sees what it means for them, reports CBS News producer Portia Siegelbaum from Havana. The changes are bound to be well received if they lead to reforms in the economy.

Fidel Castro has not been seen in public since July 2006, when he underwent emergency intestinal surgery.