(CBS)
The native Amerindian population of Cuba began to decline after the European discovery of the island by Christopher Columbus in 1492 and following its development as a Spanish colony during the next several centuries. Large numbers of African slaves were imported to work the coffee and sugar plantations, and Havana became the launching point for the annual treasure fleets bound for Spain from Mexico and Peru.

Spanish rule, marked initially by neglect, became increasingly repressive, provoking an independence movement and occasional rebellions that were harshly suppressed. It was U.S. intervention during the Spanish-American War in 1898 that finally overthrew Spanish rule. The subsequent Treaty of Paris established Cuban independence, which was granted in 1902 after a three-year transition period.

Fidel Castro led a rebel army to victory in 1959; his iron rule has held the regime together since then. Cuba's Communist revolution, with Soviet support, was exported throughout Latin America and Africa during the 1960s, 1970s, and 1980s.

The country is now slowly recovering from a severe economic recession in 1990, following the withdrawal of former Soviet subsidies, worth $4 billion to $6 billion annually. Cuba portrays its difficulties as the result of the U.S. embargo in place since 1961.

Illicit migration to the U.S. - using homemade rafts, alien smugglers, air flights, or via the southwest border - is a continuing problem. The US Coast Guard intercepted 2,810 individuals attempting to cross the Straits of Florida in fiscal year 2006. 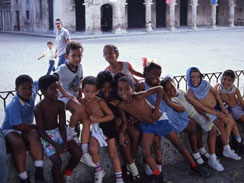 People - note:
illicit emigration is a continuing problem; Cubans attempt to depart the island and enter the US using homemade rafts, alien smugglers, direct flights, or falsified visas; Cubans also use non-maritime routes to enter the US including direct flights to Miami and over-land via the southwest border 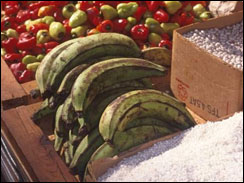 The government continues to balance the need for economic loosening against a desire for firm political control. It has rolled back limited reforms undertaken in the 1990s to increase enterprise efficiency and alleviate serious shortages of food, consumer goods, and services. The average Cuban's standard of living remains at a lower level than before the downturn of the 1990s, which was caused by the loss of Soviet aid and domestic inefficiencies. Since late 2000, Venezuela has been providing Cuba oil on preferential terms, and it currently supplies about 98,000 barrels per day of petroleum products. Cuba has been paying for the oil, in part, with the services of Cuban personnel, including some 20,000 medical professionals. In 2006, high metals prices continued to boost Cuban earnings from nickel and cobalt production. Havana continued to invest in the country's energy sector to mitigate electrical blackouts that have plagued the country since 2004.

Exchange rates:
Convertible pesos per US dollar - 0.9231 (2006)
note: Cuba has three currencies in circulation: the Cuban peso (CUP), the convertible peso (CUC), and the US dollar (USD), although the dollar is being withdrawn from circulation; in April 2005 the official exchange rate changed from $1 per CUC to $1.08 per CUC (0.93 CUC per $1), both for individuals and enterprises; individuals can buy 24 Cuban pesos (CUP) for each CUC sold, or sell 25 Cuban pesos for each CUC bought; enterprises, however, must exchange CUP and CUC at a 1:1 ratio.

Find out more about the communist country and the fiery leader who led the Cuban Revolution.