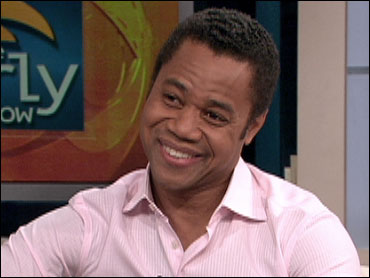 Cuba Gooding Jr., known for his energetic performances in "Jerry McGuire" and "As Good As It Gets," knows how to encapsulate strong African American characters. In a new role he is taking on the powerful, yet calming spirit of African American neurosurgeon Dr. Benjamin Carson.

Gooding stars in a new TNT movie, "Gifted Hands: The Ben Carson Story," based on the true story of Carson, who escaped the urban underbelly and became one of the top pediatric neurosurgeons in the world.

Both Gooding and Carson sat down with Early Show co-anchors Maggie Rodriguez and Harry Smith.

Carson recalled growing up in Boston and Detroit and living in poverty.

"Large multifamily dwellings, boarded-up windows, sirens, gangs, murders, rats and roaches, the whole nine yards. Anything you can imagine, that's what it was," Carson said.

And a source of even greater pain for Carson was how he was treated at school.

"When I was a kid, I didn't think that I was very smart," Carson admitted.

He was failing in school and his temper was out of control.

With his mother's love and encouragement, he healed his temper and gained the confidence to get to the top of his class.

"When I think about where I came from to where I am now, it's kind of mind boggling," Carson said.

Now he is a celebrated neurosurgeon, a leader in his field.

"The first time I met him, he was receiving the medal of freedom award from President Bush at the White House. And I spent the evening with him and Candy (Carson's wife) and his mom. And just, truly - I always say about men like this, it's like they're God's tool. He's really given them a gift, and he's just touched so many people," Gooding said.

Carson is truly a selfless person and his life's work is based on helping others.

"It's amazing because if you think about it, especially the miracle surgeries he did early in his career, the separation of the Siamese twins and the healing of the children, stopping seizures. These are children and he has to go to the parents and say, 'I'm going to cut your child's brain open and remove a piece of it.' It's the way he speaks to them, he just calms, and he's got such a calming spirit," Gooding said.

Like Carson, Gooding credits his mother for his success as well.

"It was interesting, too, because I had known he was a neurologist. I didn't know what he had - a lot of his accomplishments. And then I read the screenplay. And I saw that he was raised by a single mother who instilled his faith in God. And my mom was the exact same way," Gooding said.

Gooding's mother divorced his father and they were separated for 13 years during his upbringing.

"She was, like, 'God, give all your problems to him and just solidify your faith.' It's what got us through -- when I say us, me, my sister, my brother -- it was a nice connection to have him," Gooding said.