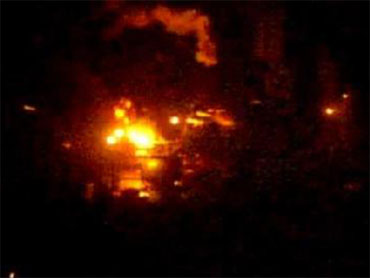 
There's no Home Depot and no one has storm shutters, but Havana residents are flocking to local supermarkets selling bottled water and canned goods in U.S. dollars as they prepare for Hurricane Charley.

Street venders were also doing a brisk business in candle sales outside of neighborhood farmers' markets.

The storm is slowly making its way toward the island and storm warnings have been issued for Pinar del Río province west of the capital and Matanzas to its east and the Isle of Youth to the South. Cuba's National Weather Service is warning that even if the storm continues in a north- westerly direction, the central provinces of Villa Clara, Cienfuegos and Sancti Spiritus can expect heavy rains even if they don't get the high winds.

In a 1 p.m. bulletin, Cuba's top weatherman José Rubiera announced the eye of the storm is expected to cross the island at the border between Pinar del Río and Havana Province, sometime around 1 a.m. Starting at that same time the capital is set to experience strong winds for up to two hours.

Rubiera also urged residents along the southern coast between the fishing town of Batabanó and the eastern limits of Pinar del Río to cooperate with the Civil Defense and prepare to evacuate their homes. That low-lying coast is prone to flooding and Charley can be expected to deliver storm surges of around 8 feet but possibly higher.

Weather forecasters are predicting Charley will be a Category 2 storm when it reaches Cuba's southernmost point, the Isle of Youth, where Civil Defense units are evacuating people and livestock from low-lying areas. Calculations show the eye of the storm crossing the Isle of Youth at approximately 8 p.m. tonight.

Local housing officials this morning expressed particular concern over potential damage to homes on the Isle saying they've still not been able to replace all the housing lost two years ago when Hurricanes Isidore and Lili raged through. Lili was also a Category 2 storm. It also caused extensive damage in Pinar del Río province, Cuba's main tobacco growing region.

In advance of this new hurricane, more than 25,000 people have been evacuated from the province. One item of good news, the province's dams are only at 35 percent capacity so there's plenty of room to hold whatever Charley can throw at them.

The Cuban Electric Company has announced it will, as customary, cut service just before the hurricane hits in an effort to limit damage. Cuban officials say they have a "long and solid experience" in confronting natural catastrophes of this type so as to incur "a minimum of victims and damage".

As a rule, very few people die as a result of hurricanes in Cuba and those that do usually ignored civil defense warnings. Only five died in November 2001 when Category 4 Hurricane Michelle crossed the center of the island destroying thousands of homes and key food crops. On that occasion the Civil Defense, which is run by the army, evacuated 750,000 people in an operation organized as tightly as a military exercise.