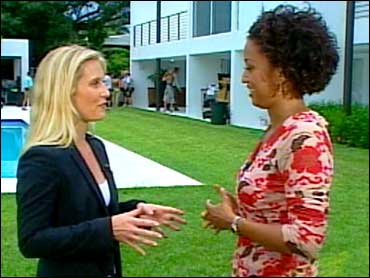 After a very successful first season, "CSI Miami" is back. The Early Show co-anchor Rene Syler recently spent some time with the cast on location in Miami.

"I love Miami, says Rory Cochrane, who plays detective Tim Speedle. "Miami is grea,t and, of course, it's great to be on a successful show."

For one, it is hot. Emily Procter, known in the show as detective Calleigh Luchesne, agrees.

She says, "I was at the beach in North Carolina, and I thought I was prepared for my return to Florida. And then I realized that if North Carolina is a B plus on the scale for humidity and temperature, then Miami is like an A plus, plus extra credit because it's just hot."

But David Caruso seems to enjoy the Miami sun. He says, "I am a Florida resident, so I don't mind the heat. I'd rather be here than in the cold. About five years ago, I discovered Miami and bought a home here. And then opened a business and so on. And I'm a member of the community."

That said, the show does a lot of the shooting in California, at least for now. Caruso expects more local filming in the future.

He says, "I think we're going to do some more this year, because the footage looks fantastic when you shoot here. The light hits the negative here in a completely different way. It is so vibrant and so electric, just by virtue of the environment."

At the time Syler caught up with the cast, they were actually shooting and though she tried to get the scoop about the scene, the cast did not volunteer much information about it.

Khandi Alexander, who plays medical examiner Alexx Woods, says with a big smile, "I can't tell you too much about it, but I will tell you someone is dead, we think it's a murder, we'll solve it."

Well that could go for just about any episode of "CSI: Miami."

As Woods, Alexander enjoys the solitude of being alone with the dead bodies, even though she finds herself talking to them.

Alexander notes, "I met with real medical examiners. Every one of them told me that the body speaks to them. That the body will speak to them and tell them things that, you know, people who aren't in the medical profession aren't privy to. So I guess, the writers and creators of the show decided to flip it so that I, as a coroner, can speak to the body and ask the body questions. But from an acting point of view, it is my inner monologue to become your very last best friend. I'm going to make sure that before you go to wherever it is you go, you have someone who's going to love you and care for you."

The show is very technical too, which makes it perfect for Alexander to spout out some incredibly technical jargon. She says every time she gets a new script, it is always an education.

But the end product is surprising. Her character speaks with such authority. That's where the show's technical adviser comes in. John Haynes thoroughly trained the cast.

Haynes says, "The notes that I gave them last year as far as being careful to step over evidence and not on evidence. To throw their looks upwards when they walk into a room, just like a real crime scene investigator would do, they are now doing naturally on their own."

Asked if she gets queasy when she has to work with very gritty stuff, Procter says, "Always. It's gruesome. I mean, it's a very grisly show. It took me, I would say, a good six months to just not be like, 'Oh, I can't do it.'"

The special effects are very real. Procter notes, "Sometimes you'll meet a person's body before you met them and you go up and say, 'Oh, you must be Jared, I recognize you from your body.'"

Rodriguez quips, "I was on the verge. I'm on the verge of being one of the sexiest men alive. So I don't know. Maybe I'll mature and go through some state of…"

Syler interrupts: He could put it in his business card, she notes, it may help him get chicks, which sounded like a good idea to Rodriguez. He says laughing, "Yeah. You know I hand that out with my phone number on it. And it's got like the logo on top in prints."

Taking the question seriously, Rodriguez says, "Every time I hear somebody say it, I actually feel kind of silly. Not a bad thing to be."

It certainly beats being the ugliest man alive. "Or the loneliest," he adds.

After appearing in a handful of episodes last season, Sophia Milos is a full time cast member in season two, and it looks like her character is trying to avoid loneliness.

Wondering if there is some sexual tension between her character and Caruso's Caine, Milos says, "I think that's definitely what the audience is inviting us to do more of. And that's the idea. We're definitely going in that direction."