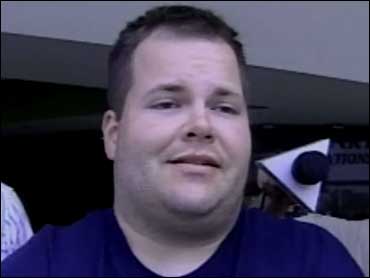 A man who jumped from a cruise ship off Florida's coast and was rescued about eight hours later by the Coast Guard, was arrested Tuesday on sex charges, authorities said.

Michael Mankamyer, 35, of Orlando was charged with sexual battery not likely to cause injury and lewd or lascivious molestation on a victim older than 12, said Liz Malavet, of the Orange County jail's inmate records. Mankamyer was being held without bond and his first court appearance is Wednesday, she said.

A police report says the incidents happened at Mankamyer's home, and after the pair had been drinking, reports CBS News correspondent Peter King.

The charges stem from an FBI investigation into Mankamyer's fall about 70 feet after jumping from the balcony of his room aboard the Carnival Glory in March, the Orlando Sentinel reported.

He had been vacationing with his godson, also under 18, but investigators say the godson is not the victim in this case.

Mankamyer allegedly got into a fight with his godson over whether the boy could go to a club on the ship to hang out with girls, which is why he jumped overboard. This sparked the curiosity of investigators, and after talking to his godson's friends, one of them came forward, saying he had had been molested by him, reports Brian Andrews of CBS station WFOR.

Mankamyer, an MRI technician at Florida Hospital South, said he was innocent and did not know why he was in custody.

"To prevent violence, we removed him from the neighborhood," Sgt. Rich Mankewich of the sheriff's sex-crimes unit told the Sentinel, adding that the boys' parents only learned of the incidents Tuesday.

Mankamyer also declined to speak with investigators, saying he had retained a lawyer. The name of his attorney was not immediately known.

The boys were children of parents Mankamyer befriended, Mankewich said.

Telephone messages, pages and an e-mail left for the sheriff's office after hours were not immediately returned.