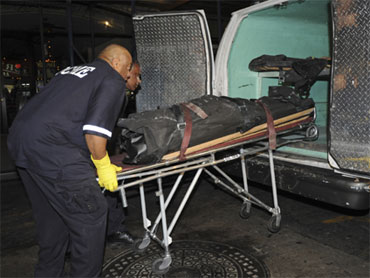 (AP Photo/Louis Lanzano)
An unidentified body is removed from a Manhattan skyscraper, July 11, 2009, in New York.

NEW YORK (CBS/AP) After uncovering a ventilation shaft trickling of blood, police discovered the body of a woman bound, gagged and taped with a gold crucifix to her mouth.

The body hadn't been identified, but police presumed it was that of Dominican-born Eridania Rodriguez, who hasn't been seen since her work shift Tuesday at the 26-story Manhattan tower. Rodriguez' street clothes and other belongings were found in her locker, and video surveillance didn't show her leaving the building.

An autopsy Sunday determined the dead woman, found in a 12th-floor air-conditioning duct, was asphyxiated by tape applied to her head and face, medical examiner's office spokeswoman Ellen Borakove said.

The woman's hands were tied behind her back, and her feet and mouth were bound, Browne said. The crucifix was dangling by the woman's mouth, top police spokesman Paul Browne said, but it was unclear whether the necklace had been caught underneath the tape.

"We haven't determined whether the crucifix ended up there incidentally or intentionally," he said.

The woman was wearing a work shirt and sweatpants and had suffered a head wound, Browne said. Her shoes were found elsewhere in the air-conditioning duct, he said.

Rodriguez, 46, was the sister of professional bodybuilder Victor Martinez. She was a native of the Dominican Republic who lived in upper Manhattan and was married with several children.

She made her last appearance on security videotape entering an elevator at the skyscraper about 7 p.m. Tuesday. Her cleaning cart was found on the eighth floor.

Rodriguez worked on some vacant floors in the 400,000-square-foot (37,160-square-meter) building, and relatives said the emptiness had unsettled her and them.

The atmosphere "is like a creepy place, empty — you know you're working in a place there's nobody but you," brother-in-law Rafael Dicent said Sunday.

He and others in the family went to the building to look for Rodriguez shortly after her disappearance.

Investigators traveled Friday to a Pennsylvania landfill where the building's garbage is taken to see if Rodriguez' body had been dumped with the trash.

The building, at 2 Rector St., is a few blocks from the World Trade Center site. Like many others near ground zero, it was upgraded with enhanced security after the Sept. 11, 2001, terrorist attacks. Cameras cover every exit, and guards staff the lobby 24 hours a day.

Among the building's tenants are Daniel Libeskind, the architect who created the master plan to redevelop the 16-acre (6.48-hectare) trade center site.