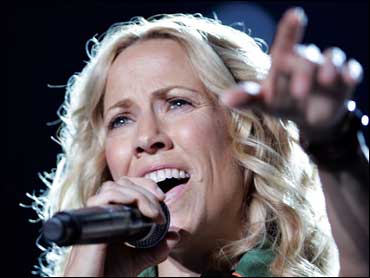 Sheryl Crow is giving away free music - a tactic she calls the "Tupperware" party approach to inspiring young people to vote.

The Grammy Award-winning singer announced a plan Wednesday to give a digital copy of her album "Detours" to the first 50,000 people who register three friends to vote.

"I hope people wake up and emotionally engage in issues," Crow told The Associated Press in a telephone interview during a visit to Los Angeles.

Crow's giveaway is a kickoff to Rock the Vote's voter registration drive. She is also offering a free download of her politically charged song "Gasoline" to anyone who logs onto the Rock the Vote Web site or anyone on the group's mailing list, said the organization's executive director Heather Smith.

Crow, 46, was one of the founding artists of Rock the Vote 18 years ago. She said the "Detours" album fits perfectly into the group's cause since the lyrics touch on topics such as adoption, breast cancer, the war in Iraq, the environment and Hurricane Katrina.

"It's about the issues that everyone's talking about, but there's a lot of hope," Crow said. "At this moment in my life, writing about anything else would be uninteresting and impossible because I feel such urgency."

Crow, who has advocated for environmental, health and humanitarian causes, said her fans know where she stands politically. But in this voter registration campaign she's concerned only for the future of her 1-year-old son, Wyatt, and the future of American democracy.

Crow suggested that more musicians should use their music to promote issues that affect Americans. She said she was inspired by pop musicians from the 1960s and 70s, when political songs were performed by Edwin Starr, Buffalo Springfield, Marvin Gaye and Peter Paul & Mary.

"There was healthy competition among artists to create art that was commercial and political at the same time," Crow said.

"Our music (now) is not representing the times - at least not socially and politically. Or maybe we're just distracted."

"These musicians speak to millions of people every day so for them to use their voices to inspire people is a key part of our program," she said.

Anyone who recruits three people to vote will have to log onto the Rock the Vote Web site and go through a verification process before receiving Crow's album, Smith said.
Raquel Maria Dillon