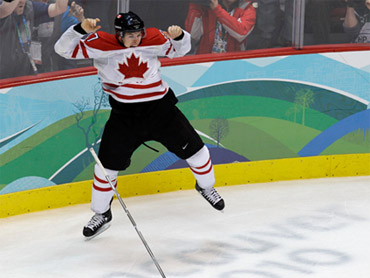 As the crowd screamed his name, Sidney Crosby raised his right hand, sheepishly acknowledging the rollicking, raucous sea of red and white. Then he looked down at the gold medal dangling from the pale blue ribbon around his neck.

The hero of a hockey-crazed nation checked both sides, as if to confirm it was real.

The Next One is now even more like Canada's own Great One.

"He's got a little destiny to him - his entire career, throughout minor hockey, junior hockey, NHL," Hockey Canada executive director Steve Yzerman said Sunday after Crosby scored 7:40 into overtime to beat the U.S. 3-2 and provide Canadians with the Olympic championship they believed was their birth right.

"So it's just another monumental moment in his career. And he's what, 22 still?" Yzerman said. "He's a special, special guy.

"Kind of" became just like with Gretzky watching Crosby's every move Sunday.

After being denied on a breakaway late in regulation by a fantastic backcheck from American winger Patrick Kane, Crosby chipped the puck off the stick of U.S. defenseman Brian Rafalski in the corner of the Americans' zone in overtime. Teammate Jarome Iginla got the puck, heard Crosby scream on his way free to the net and pushed the puck his way.

"Oh, he was screaming. He was yelling pretty urgently. There's different phases of yell," Iginla said, chuckling. "You can tell he had a step."

Crosby broke across the face of Ryan Miller and put the puck between the U.S. goalie's legs, setting off a wild celebration from Newfoundland to the Yukon.

Its epicenter was in the opposite corner of the ice, where Crosby threw off his gloves, his stick as he was mobbed by nearly every Canadian player in a mosh pit along the boards.

Miller stayed on both knees for a second while the puck was in the back of the net, then collapsed forward to lie facedown on the ice, surrounded by the Canadians' gear.

"It's a pretty unbelievable thing," Crosby said. "You know what? Every kid dreams of that opportunity. Being in Canada, that's the opportunity of a lifetime. You dream of that a thousand times growing up. For it to come true is amazing."

Not to his countrymen, who have come to expect the impossible from Sid the Kid.

"He's unbelievable. There's nothing that kid can't do or hasn't done already," said Canada forward Jonathan Toews, who scored Sunday's first goal. "We were saying after the third period that someone was going to be the hero, someone was going to find a way to do it for us, and it's no coincidence he was the guy.

"He's a tremendous leader. He's accomplished so much in his young career."

Add an Olympic gold medal to that list of accomplishments. It already includes a Stanley Cup, NHL MVP honors, and the NHL scoring title.

His latest, greatest gem came with a little luck.

Crosby, goaltender Roberto Luongo and other Canadians said the longer intermission between regulation and overtime, instead of the brief breaks that had been the norm in the earlier Olympic rounds, allowed each player to get over the shock of American Zach Parise tying the game with 24.4 seconds left in the third period.

"Once we got past about 10 minutes into the intermission we realized, 'You know what? We've still got a chance here,"' Crosby said. "We just said, 'Let's go after it.'

"I didn't want to have any regrets."

Crosby's amazing game-winning goal gave Canada the perfect ending to its Olympics and provided further evidence the Next One is already here.

"It's just fitting, I think, that Sid would get it," Canada goalie Roberto Luongo said, near tears. "I couldn't think of anyone better."