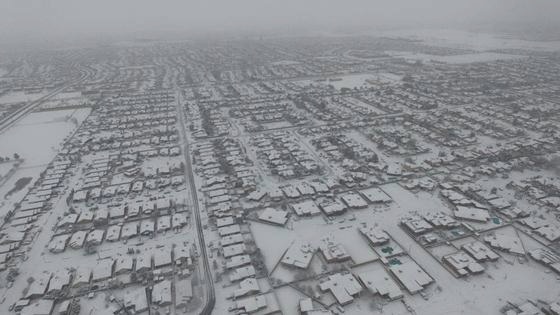 TEXAS -- At least 11 people died and dozens were injured in strong tornadoes that swept through the Dallas area and caused substantial damage this weekend, and now Texas is dealing with more extreme weather -- a blizzard.

It was the latest in a succession of powerful weather events across the country -- from heavy snow in New Mexico, west Texas and the Oklahoma Panhandle -- to flash flooding in parts of the Plains and Midwest.

Days of tumultuous weather have led to 43 deaths overall -- those in Texas, plus five in Illinois, eight in Missouri and 19 in the Southeast.

The Texas Department of Public Safety in Amarillo strongly discouraged travel throughout the entire Texas Panhandle -- a 26-county area covering nearly 26,000 square miles -- because blowing and drifting snow had made the roads impassable. Interstate 40 west of Amarillo to the New Mexico border will be closed until Monday morning.

As several inches of snow fell in the Borderland, driving conditions became hazardous and many businesses and services are closed for the weekend, CBS affiliate KDBC in El Paso reports.

Blizzard-like conditions have led to icy roads and numerous closures on major freeways in New Mexico. Packed hotels along I-40 in New Mexico had to turn people away Saturday night, police spokesman Fred Duran said.

New Mexico's governor declared a State of Emergency on Sunday as residents dealt with the fallout of a crippling snowstorm.

Crews were working around the clock on clearing roads and conducting any needed search and rescue operations, Gov. Susana Martinez said in a statement in which she also urged safety.

"I ask New Mexicans to please stay off the roads until the conditions improve," Martinez said.

In Albuquerque, police said they had responded to 178 weather-related accidents by Saturday night. About 58 involved injuries.

Officials at Albuquerque International Sunport said the impact on flights so far has been minimal. Anyone driving on the roads around the airport should use caution, Sunport spokesman Daniel Jiron said.

The white-out has also compelled popular sites around the state to close. In Alamogordo, White Sands National Monument didn't open because of the wintry weather conditions. The state Department of Corrections canceled visits at all state facilities.

The National Weather Service says it is expecting historic snowfall totals. According to meteorologists, metropolitan Albuquerque received as much as 6 inches of snow within 24 hours.

Eastern portions of the state were hit especially hard. In Roswell, city officials reported receiving between 14 and 18 inches of snow since Saturday afternoon with another 8 inches on the way. Meteorologists said some areas saw 5- to 12-foot snow drifts and winds up to 70 mph.

The stormy weather is expected to lighten up by Monday morning, according to Albuquerque meteorologist Chris Luckett.

"All of New Mexico can get a break from the storm," Luckett said. "There will just be a lot of leftover snow and ice."

Oklahoma Gov. Mary Fallin declared a state of emergency as there were blizzard conditions and an ice storm warning out west and flood warnings in the east, where one community had received 9 inches of rain.

Missouri's governor has declared a state of emergency because of widespread flooding that has led to at least eight fatalities.

Gov. Jay Nixon's office said in a release Sunday that weekend flooding has led to eight deaths, dozens of water rescues and evacuations. More flooding is expected while river levels continue rising around the state.

Several roadways have also been closed because of flooding, including a section of Interstate 70 outside St. Louis.

"This is a huge impact on our community and we're all suffering," Garland Police Lt. Pedro Barineau said of the community about 20 miles northeast of Dallas, where eight people died, 15 were injured and about 600 structures, mostly single-family homes, were damaged.

The weather service said an EF-4 tornado, which is the second-most powerful with winds up to more than 200 mph, hit the community at about 6:45 p.m. Saturday. It was near the intersection of Interstate 30 and George Bush Turnpike, which is a major route in the region. At least three people who died were found in vehicles, said Barineau, who also noted that some cars appeared to be thrown from the interstate, though it wasn't known whether that was the case for the people found in the vehicles.

Sunday afternoon, Mike Gerourd brought his wife Nancy back to their home for the first time since they lived through the tornado, reports CBS News' David Begnaud.

"We went from being just inconvenienced to realizing we could've been dead," said Mike.

Nancy was on the couch, she pulled the big cushions on top of her.

"In an instant, it hit and less than 60 seconds, which seems like an eternity, it was gone," said Mike.

"My boys grew up in this house, and everything's gone," said Nancy.

"We just, we don't know what to do," said Mike. "We went from happy to homeless in a minute. But we'll rebuild or we'll do what we have to do."

Natalie Guzman, 33, stood took photos of her family's home in a Garland neighborhood. The garage wall had collapsed and the roof fell in. The only part of the house that appeared to be spared was the master bathroom, where her brother-in-law took shelter Saturday night. He was the only one at home and told her he had just enough time to get himself and his dogs into the bathroom.

"It was worse than I thought," Guzman said, comparing the scene to the photos her brother-in-law had sent the night before.

The destruction in Garland was so overwhelming that Dallas County Judge Clay Jenkins declared the city a disaster within mere minutes of seeing the toll firsthand.

"I don't declare local disasters lightly," Jenkins said. "But I looked at the scene for 10 minutes, spoke to the incident commander and then called the lawyers to bring the paperwork."

In the nearby town of Rowlett, City Manager Brian Funderburk said Sunday morning that 23 people were injured, but that there were no deaths and no reports of missing people. The weather service said damage indicated it was likely an EF-3 tornado, which has winds up to 165 mph.

The Dallas/Fort Worth forecast office issued a statement Sunday night confirming that nine tornadoes ranging from an EF-0 to an EF-4 touched down a night earlier.

The Weather Service says not all the tornado damage has been examined and additional surveys are planned Monday. It says the number of tornadoes may go up.

Dale Vermurlen lived in a Rowlett neighborhood that sustained heavy damage. His house only had minor damage, but was next to that were flattened.

"I grabbed both dogs by the collars and held on to the toilet. I said 'OK this could be it boys.'"

Authorities surveying damage from tornadoes in North Texas say there may be as many as 600 homes with damage in the Dallas suburb of Rowlett.

Dallas County Judge Clay Jenkins said in a statement Sunday evening that damage figures could change. He says assessments are ongoing but have been delayed due to rain.

The new figure brings the total estimate of damaged homes in Texas to as many as 1,450.

A 24-hour curfew has been established for Rowlett in the affected areas. Jenkins' statement says only residents and emergency personnel will be allowed access.

Homes in the neighborhood that had been searched by emergency responders were marked with a black "X." In some instances, it looked like homes had been picked up and set back down in a big pile. State troopers were blocking off roads, utility crews were restoring power and people were walking around hushed and dazed.

Three other people died in Collin County, about 45 miles northeast of Dallas, according to sheriff's deputy Chris Havey, although the circumstances were not immediately clear.

Weather service meteorologist Matt Bishop in the Fort Worth office said the tornado outbreak at this time of the year for North Texas occurs "from time to time ... but it's certainly not something that happens regularly."